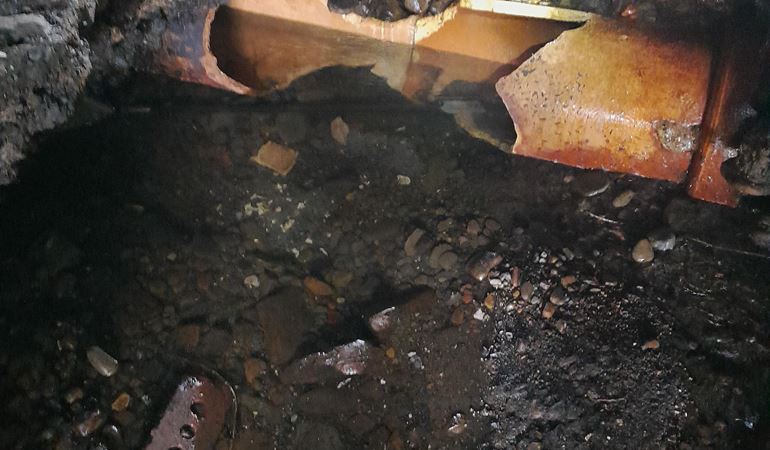 A damaged sewer pipe is now thought to have halted the flow of the Afon Lliedi in the Llanerch area of Llanelli on 16 August.

Natural Resources Wales officers have been on site continuously in shift pattern monitoring the dam and the pumps they had installed to pump water around the hole and back into the river channel downstream.

Coal Authority officers attended the incident early on Tuesday (17 August) morning and found that the hole was not a sinkhole as had previously been suspected.

After receiving confirmation that the site was stable, NRW officers investigated and found that a damaged pipe was at the base of the hole that was taking the water flow. After working with Welsh Water colleagues, it was confirmed that the pipe is a sewer pipe.

Ioan Williams, NRW Duty Tactical Manager for South West Wales said: “By pumping the river flow downstream and beyond the hole, our officers on site have been able to restore a good level of flow to the Lliedi. I’m very grateful to them for their quick and effective work.

“We will carry out a fish assessment of the river see if further fish have died due to a lack of water flow. We know that approximately 50 fish had died before we installed the dam and pumping equipment, and we expect that our actions have limited further damage to fish and other aquatic life in the Lliedi.

“Although unusual, a pipe such as this could well be capable of removing a large majority of river flow when the river is in low flow as was the Lliedi. Once the repair is in place, we will monitor water levels in the river.”

Discussions are ongoing between NRW, Welsh Water and Carmarthenshire County Council on the best way to repair and protect the damaged pipe and on when the closed bridge can be reopened. Once repaired, the dam and pumping equipment will be dismantled which will allow the natural flow of the river to resume.

The pumps and lights are expected to be operating overnight and are due to be removed on Wednesday 18 August.