The purpose of the Marine Conservation Zone is, as part of a network of various types of Marine Protected Areas, to safeguard the full range of marine wildlife diversity. 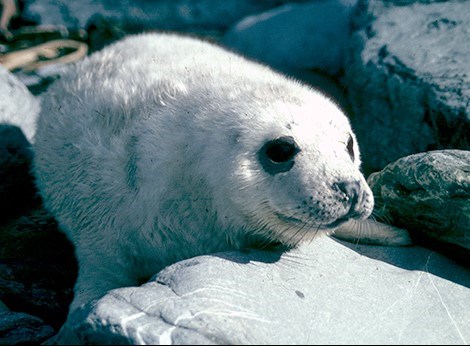 Skomer, the first MCZ in Wales, was established in 2014 and is situated around the island of Skomer and the Marloes Peninsula in Pembrokeshire, south west Wales. Before 2014 the area had been Wales’ only Marine Nature Reserve for 24 years.

Skomer MCZ has species and habitats of national and international importance. These include grey seal, pink seafan, sponge communities, eelgrass and algal communities.

Skomer MCZ has byelaws which are under nature conservation legislation. These restrict activities such as dumping rubbish and taking, killing or disturbing wildlife.

There is a 5-knot speed limit within 100m of the shore to reduce disturbance to wildlife. The Reserve also benefits from specific fishery byelaws, prohibiting the use of mobile fishing gear (dredges and beam trawls) and the taking of certain scallop species by any means.

You can arrive at the Marine Conservation Zone by boat or overland to Martins Haven.

There is a marine exhibition centre run by NRW and a large National Trust car park and toilets at Martins Haven. Seasonal scheduled ferry services depart from here to the islands of Skomer and Skokholm and pass through the Marine Conservation Zone.

All activities are subject to voluntary codes of conduct in addition to the bylaws mentioned above.

There is a management plan for the site with an associated zone map, which indicates those areas where activities are restricted or prohibited by byelaws and codes of conduct.

The majority of the work on the MCZ is biological monitoring of seabed organisms, but managing human activity, so that it is in line with the provisions of the zone map, plays a large part. Staff provide and maintain marker buoys and carefully sited visitor moorings to facilitate this, as well as liaising closely with users and other stakeholders.

The MCZ has an advisory committee which meets annually, made up of around 40 individuals and organisations with an interest in the area.

An extensive research and monitoring programme operates that aims to broaden our knowledge and understanding of the marine species, communities and habitats found in the MCZ and an annual summary report and annual scientific reports are produced.

You can look at our list of marine evidence and reports publications, including those about Skomer MCZ.

Non-destructive research by third parties is encouraged and supported, and links with a number of academic institutions are maintained.