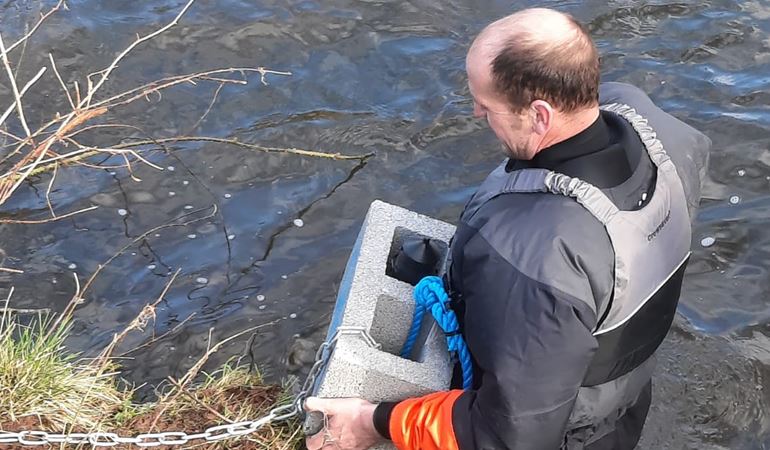 A new project which will allow the migratory movements of salmon smolts along the River Usk to be tracked has been launched by Natural Resources Wales (NRW) to discover the biggest challenges they face when migrating to sea.

The project, supported by The Wye and Usk Foundation, will involve catching up to 100 salmon smolts a year and tagging them with acoustic transmitters. These devices will then be picked up by a network of over 30 receivers deployed throughout the river, providing scientists with data related to survival rates and migration behaviour which will help inform future salmon management and conservation work.

A smolt is a stage of the salmon life cycle when the fish is preparing for migration to sea. By tracking salmon during this stage, NRW can see how they’re affected during their travels and what can be done to improve their chances of successful migration.

“Salmon numbers, both adult and juvenile, are at record lows in Welsh rivers as well as in other parts of the world. When we see species numbers dropping like this, we need to do all we can to understand what’s causing the problem and determine what can be done to safeguard the species’ survival.

“By tagging these salmon smolts and using our network of receivers to track them during their journey to sea, we can find out what’s making life so difficult for these fish, be it delays at barriers, predation, low river flows or anything in-between.

“We’re grateful for the support of the Wye and Usk foundation in the roll out of this project. Ultimately, the information and data we gather will inform our collaborative work in the area of salmon conservation, which will prove invaluable in our efforts to tackle the cause of the population declines in the long term.”

The first of the receivers were placed along the Usk in late February with salmon smolt capture and tagging expected to begin during April.