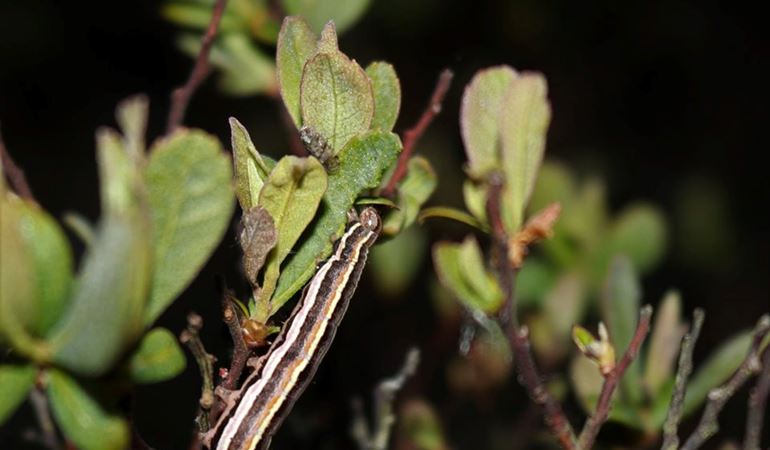 One of the UK’s rarest moths once thought to be extinct appears to be making a remarkable recovery at a mid-Wales nature reserve.

The count at Cors Fochno near Aberystwyth recorded 123 caterpillars, the record was 155 in 2009.

But the annual survey only covers a very small part of the site which means there is potential for more to be found.

The survey takes place at night as the caterpillars are nocturnal and spend the day underground.

Once it’s dark they climb the stem of their foodplant and come out to feed. They do this at night when there is less risk that birds will eat them.

“For the second year running, this is a great result which proves the value of the way we’re managing the habitat at Cors Fochno.

“As a lowland raised bog, Cors Fochno is a stronghold for this species because of its abundant supply of food and its waterlogged peaty soil.

“The main food plant for the caterpillars on Cors Fochno is bog myrtle, of which there is an abundant supply, they also feed on crowberry, and occasionally bog rosemary.

“Considering the annual survey averages 45 caterpillars, this year’s results are exceptionally high, compared with previous years like 2017 where only 19 caterpillars were observed.”

After last being seen in Cambridgeshire in the 1850s the species was not seen until a single moth was spotted in Penrhyndeudraeth in 1965. Two years later a colony was found at Cors Fochno. (see “additional information, below”)

Work undertaken by the New LIFE for Welsh Raised Bogs project will help make Cors Fochno a better habitat for the moth.

It will reduce the numbers of small trees and a certain grass (molinia), helping to promote and support bog myrtle and other special bog plants which the rosy marsh moth depends upon.

Additional information: The mystery of the lonely moth

Prior to its discovery on Cors Fochno in the 1960s the last known UK locality for the species was a wetland in Cambridgeshire in 1850.

But most of the wetland habitat suitable for the rosy marsh moth in that area has now been lost.

A single individual of the species was rediscovered by a scientist on holiday in Penrhyndeudraeth in 1965.

Following the dramatic discovery, two years were then spent searching nearby suitable habitat by many experts for this rare moth.

With a lot of head scratching and not a lot of suitable habitat near Penrhyndeudraeth, the search area was widened.

It was concluded that the moth found in Penrhyndeudraeth had been accidentally transported from Borth courtesy of the coastal railway line.

Since its discovery at Cors Fochno it has been found on a couple of other raised bogs in Ceredigion including Cors Caron National Nature Reserve and another site in south Cumbria.