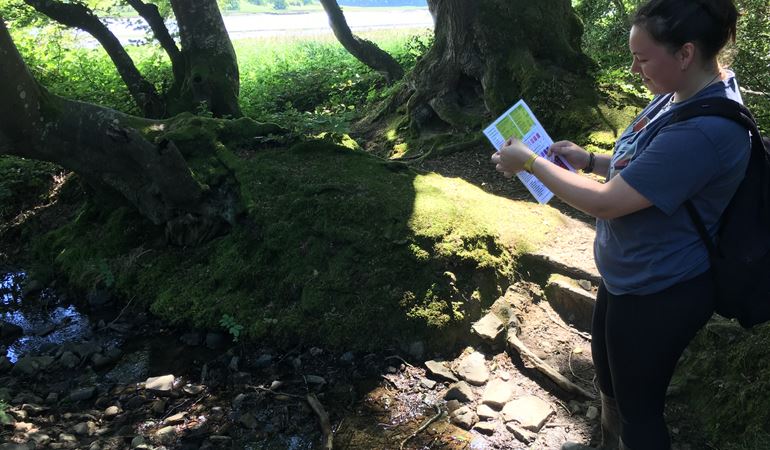 SWEPT (Surveying the Waterway Environment for Pollution Threats) has seen over 100 volunteers conducting repeat surveys of stretches of the shore within the Milford Haven Waterway, testing water samples for levels of nitrates and phosphates.

The resulting detailed picture of nitrate pollution will be an invaluable resource for NRW officers to target their efforts in helping to reduce the amount of pollution which enters the Waterway.

SWEPT was led by the partnership of managers for the Pembrokeshire Marine Special Area of Conservation, in collaboration with the West Wales Rivers Trust, Pembrokeshire Coastal Forum and the Darwin Centre. Expert input from NRW staff benefitted the project enormously.

The SWEPT project won The Park Protector Award 2019, run by Campaign for National Parks - the charity for England and Wales’ 13 National Parks.  The award (a grant of £2000 sponsored by the Ramblers Holiday’s Charitable Trust), celebrates and supports projects that make a difference to protecting some of the most famous countryside in the world.

“The quality and amount of data generated by our enthusiastic volunteers has far exceeded our expectations. During what is officially UK Volunteers’ Week, I thank all the volunteers for their invaluable contribution.”

“The grant enabled us to do a thorough job on the report, maps and appendices, making it into a valuable resource for people wanting to replicate the methodology themselves.”

During the four months of surveying the Milford Haven Waterway, 2105 photos and close to 900 nitrate and phosphate tests were taken by volunteers.  In addition, four canoe trips collected data from hard to reach areas and university students have been involved in data collection and analysis.

“Including local people in local environmental issues aids awareness and understanding of human impacts and this provides real impetus for environmental protection.”

“We should all be more aware of our close connection to the sea and take actions to look after it and its wildlife, whether that is being careful of how we dispose of our waste, mindful of what we flush down drains, or how we use the sea and interact with wildlife.”

“The Pembrokeshire Marine Special Area of Conservation (SAC) is currently in unfavourable condition within the waterway - the inner section of the waterway, Pembroke river and upstream, is currently failing to meet ‘good’ status, which is required for EU Water Framework Directive compliance by 2027.”

“The data will fill gaps in NRW’s data coverage and will help NRW to prioritise land conservation actions and lead to environmental improvements.”

“In addition to the water quality results, volunteers also collected information on marine litter, non-native species and any other pollution threats, such as oil or fly tipping.”

“All immediate pollution concerns logged during the fieldwork were followed up and resolved by NRW.”