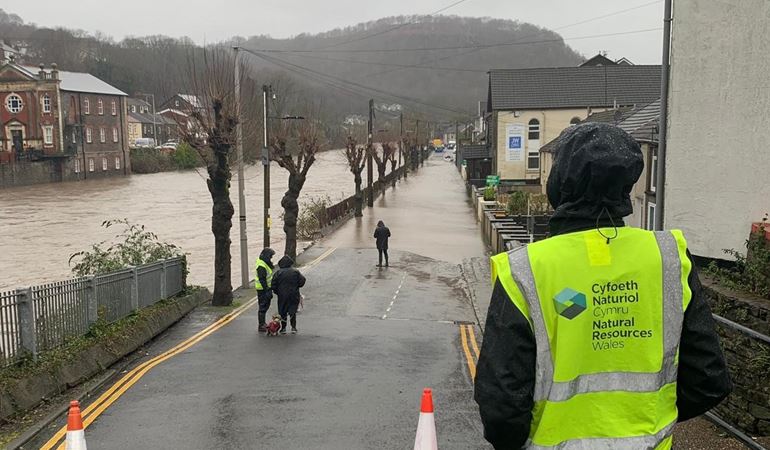 If flooding hasn't happened to you in the past, it doesn't mean it won't happen in the future.

This is the message from Natural Resources Wales (NRW) as it marks two years since the onset of the February 2020 floods triggered by Storms Ciara, Dennis and Jorge.

The storms resulted in record rainfall and river levels across Wales, and some of the most significant and devastating flooding seen since the 1970s with 3,130 properties affected right across the country.

These, and subsequent storms experienced in Wales since, serve as a stark warning that record-breaking flooding is becoming a harsh new reality for Welsh communities in the future, and the need to act now to prepare for climate impacts is more pressing than ever.

Flooding is a deeply personal tragedy, and our thoughts continue to be with those still recovering and rebuilding.

But as more and more communities affected by flooding each year count the cost of lost belongings, ruined homes and businesses, and as people live with lingering fears of future storms, we know that so much more needs to be done to prepare ourselves to face our future reality.

COP26 and the ‘code red’ signals from the Intergovernmental Panel on Climate Change report certainly gave renewed impetus for governments to tackling this pressing issue, and we’ve seen a shift in how key players think about climate and its impacts closer to home.

The central focus given to climate change in the Welsh Government’s Programme for Government, and the emphasis placed on mitigating future flood risk in the Co-operation Agreement between Labour and Plaid Cymru are all welcome strides forward.

But while progress has certainly been made, the climate problem has also accelerated. Which is why our thinking and our actions to help mitigate and adapt to its impacts needs to go further and faster if we’re to secure the improved flood-risk outcomes we need for the people of Wales.

Today (15 Feb) marks the anniversary of Storm Dennis – the second and most destructive of the three named storms to hit Wales in the space of four weeks in February two years ago.

Since then, NRW has continued to invest in flood defences, inspecting and repairing where needed, and doing important maintenance work to ensure people and properties continue to feel the benefits.

It has also invested in its incident response teams and made changes and improvements to systems and processes to increase its own resilience to future flood incidents.

Progress is also being made on the development of flood schemes across Wales, prioritising those communities most at risk.

This month, NRW announced the completion of a tree catcher scheme in the River Ely, designed to trap debris at a safe location upstream of a pinch-point bridge, reducing the risk of flooding to 490 properties in the Ely and Fairwater areas of Cardiff.

Work to improve the structural condition and size of the sea outfall at the end of the Cadoxton Brook has been completed in Barry. This will help ensure flood waters are conveyed effectively out to sea and make reduce the risk of tidal inundation to the local area.

Major work is underway at Llyn Tegid in Y Bala to ensure it can continue to withstand extreme weather now and in the future. The main focus is strengthening the lake’s embankments and replacing the lakeshore stone wave protection.

However, as climate change increases the likelihood for more extreme weather events to occur, the expectation is that risks will expand beyond the high-risk areas we know today.

Which is why the launch of NRW’s flood map for planning is a key step forward in helping to communities and businesses to prepare for the future. The map, which supports the new TAN15 planning policy, includes climate change information for the first time, demonstrating how changes will affect flood risk over the next century and showing the potential extent of flooding assuming no defences are in place.

The improvements made to the digital services on NRW’s website also now mean that it can share its data-driven, expert knowledge and forecasts with people, communities, and business owners. The service to check flood risk by postcode, and the availability to access real-time river level, rainfall and sea level date means that people are now more empowered than ever with the information they need to understand their flood risk and prepare for any future impacts.

Climate scientists have underlined that record floods are not anomalous, they are the beginning of a new normal, and the new records will continue to be exceeded, year after year.

That is why it’s crucial that people trust in the data and the knowledge we share, to understand their flood risk and understand the actions they can take to lessen the impacts should the waters start to rise.

While we welcome the additional funding NRW has received to increase our own capacity to prepare for and respond to these eventualities, we accept that we will never win the war against the forces of nature alone.

But by working together, we have greater potential to mitigate against the impacts. Difficult decisions will need to be made, and it will take time, significant effort and a cultural and a behavioural shift to make the difference required.

But we’re committed to working together with the Welsh Government and our partners to develop our flood response work, alongside our commitment to the climate agenda, to do all we can to reduce the risks for communities from the impacts of flooding in the future.