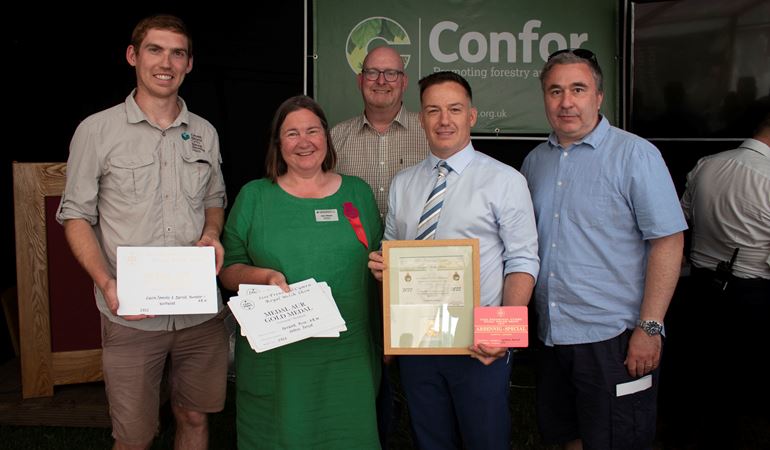 Competing at the ceremony on 19 July against public and private woodlands across South East Wales, the work by NRW’s forestry teams impressed the award judges.

The judges visited each of the 22 woodlands that entered the competition. They considered how the woodlands have been managed over the past ten years and were pleased to see environmental challenges, both current and future, being reflected in the planning and management of the woodlands.

Gethin Forest, the winner of four awards including the special prize for the best community or public access woodland, covers 857 hectares in the South Wales valleys near Merthyr Tydfil.

The forest is managed for multiple benefits, with a mixture of conifer and semi-natural ancient species, and a newly established area of mainly Norway Spruce that the judges thought showed impressive growth and stocking due to good management practices.

Most of the recent restocking of the Welsh Government Woodland Estate has been as a result of removing infected larch trees. But this has given NRW the opportunity to diversify species and to increase biodiversity and forest resilience for the future.

Gethin Forest also contains over 300 hectares, which is leased to Bike Park Wales and currently has 42 mountain bike trails and a large visitor centre and attracts an average of 500 cyclists every day.

“Seeing our forest operations teams winning so many awards in such a competitive sector is testament to their hard work, professionalism and dedication in managing our forests.”

“There is a renewed focus on forestry across South Wales which can sometimes be negative.

“We recognise the importance of woodlands and trees for their environmental benefits and in combatting the climate and nature emergencies, but also for their many social and economic benefits.

“We are exploring how woodlands and trees can be better managed to provide the benefits most needed in South Wales, while ensuring woodlands are connected, healthy and diverse with resilient ecosystems for nature, for us and for future generations.”

The other big winner was Wentwood Forest in Monmouthshire for the planting of broadleaf species following the felling of infected larch.

Wentwood Forest is the largest area of ancient woodland in Wales and is managed by the Woodland Trust and NRW.

Most of the original native trees in the area managed by NRW were felled during the middle of the 20th century to make way for fast-growing, timber-producing conifers.

NRW’s plan is to restore Wentwood to a native broadleaved woodland and create valuable habitats for wildlife.

The newly planted trees are protected by biodegradable tubes, rather than plastic, to stop grazing animals eating the trees.

For more information about the forest and nature reserves that NRW manages, and how to visit them, got to naturalresources.wales/days-out