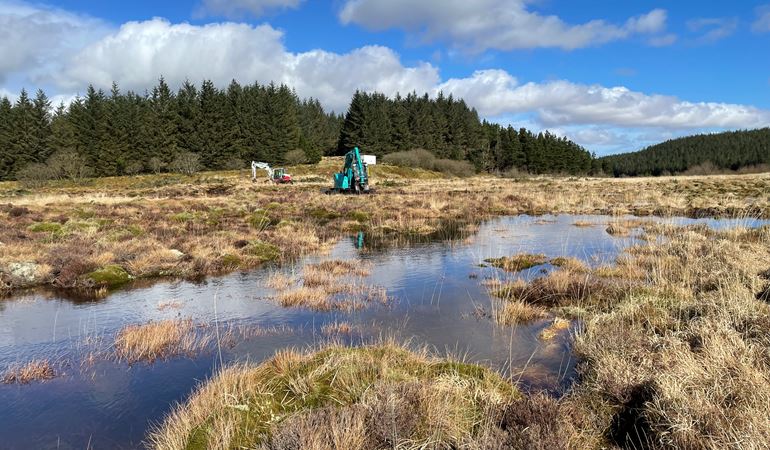 Wales’ precious peatlands can now be seen on a new map that will track how the habitat recovers through conservation action over coming years.

Vital for storing vast amounts of carbon in the fight against climate change, peatlands also harbour a wealth of wildlife, help purify water and can reduce flood risk.

Responding to the climate and nature emergencies, the Wales Peatland Action Programme has ambitious targets for restoring Welsh peatlands.

Building on the work already done during the first two years of the programme, a new grant scheme opens this week with £100,000 available to individuals and organisations for developing peatland conservation projects that could then be funded through the Wales Peatland Action Programme, or other funding streams.

Found here, the Peatlands of Wales Map is part of a new one-stop-shop Welsh Peatland Data Portal of information on many aspects of peatland conservation, managed by Natural Resources Wales (NRW).

It captures the extent and depth of Welsh peatlands, including information about how much carbon they store and an estimate of the carbon they release into the atmosphere when in a poor condition.

The Map is available free to download and use. It will be regularly updated to show an ever-improving picture of the habitat’s recovery through conservation management.

Minister for Climate Change Julie James said: “Our bogs might not sound very glamorous, but they are Wales’ unsung heroes. Their restoration is vital to our response to the nature and climate emergencies. When peat bogs are in a good state of repair, they are our most efficient terrestrial carbon sinks; they are home to a wide range of wildlife and plants, and even help purify our drinking and bathing water. But when they are degraded, they can emit more carbon than they consume and help accelerate climate change.

“The maps published today will help us understand their valuable role. With this knowledge and the new peatlands funding pot, I encourage groups and communities to get involved in the restoration and protection of our bogs so we can pass on a Wales that we are proud of, to our future generations.”

Welsh peatlands urgently need restoring due to past, and in some cases ongoing, impacts including drainage, erosion, habitat loss and nutrient enrichment. When drained, peatlands dry out, leading to the release of carbon - accumulated in the peat over thousands of years - adding to greenhouse gas emissions.

“That’s where the grants come in.  With most Welsh peatlands still in a poor condition, we’re looking forward to a lot of interest from individuals and organisations across Wales that want to make a difference.”

This year’s peatlands development grant application window closes on 4 July 2022 and can be found here.

Restoring Wales’s peatlands involves a wide range of partners - including the Welsh Government, NRW, RSPB, the National Trust, National Parks, Local Authorities and all the farmers and other land managers so critical to the survival of these unique places.