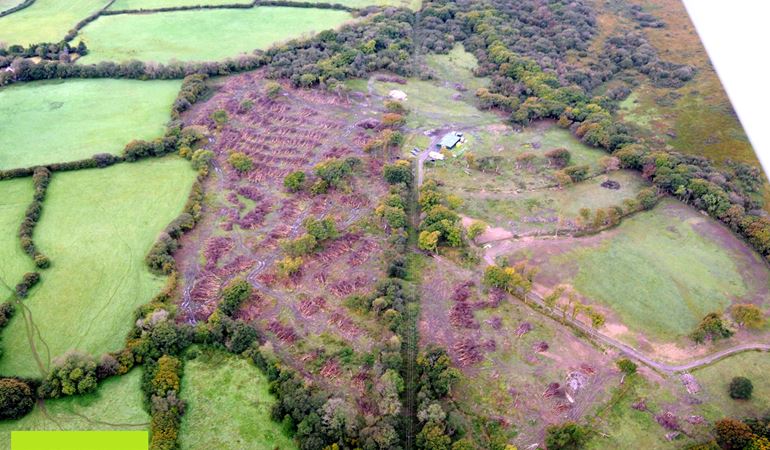 A landowner has been convicted for the illegal felling of over eight hectares of woodland, within the Gower Area of Outstanding Natural Beauty (AONB) near Swansea, South Wales.

He was also found guilty of noncompliance with an enforcement notice to restock trees which he had previously felled in 2019.

Investigations carried out by officers from Natural Resources Wales (NRW) revealed that a total of 8.5 hectares (equivalent of 12 football pitches) of native and wet woodland located to the north of Ilston had been cut down with out the appropriate licence.

Native and wet woodland are a priority habitat listed under section 7 of the Environment Act Wales.

Officers first attended the site in 2019, following a report of illegal felling, where Mr Lane was found to have exceeded the limitations of his thinning licence and clear felled 2.9 hectares of trees.

A warning notice was issued to restore the site and Mr Lane was advised not to carry out any further felling.

In September 2020 officers received aerial photos taken by the Gower Society and undertook investigations which established that a further 457m³  of woodland (the equivalent to more than 20 lorry loads of timber) had been felled.

The trees were felled using tree shears for the production of biomass. Many were uprooted and damaged to an extent where they are unlikely to regenerate, with officers noting it was one of the worst offences of illegal felling they had seen for 30 years.

Trees are incredibly important for the environment and wildlife, as part of the landscape and for our own health and wellbeing.

The loss of this native and wet woodland, is devastating and it will take many generations for new trees to grow to replace them, if they grow at all.

Like many things in our environment, trees are often taken for granted. Felling licences are part of the system we have in place so we can manage our trees and woodlands effectively, protecting them and making sure they continue to benefit us all now and into the future.

NRW are now seeking to obtain a Proceed of Crime Act (POCA) confiscation order which seeks to obtain the financial benefit that the defendant has gained from his criminal conduct. This was the first time POCA has been used in forestry in the UK.

The case was  sent to Swansea Crown Court yesterday (19 April) to determine whether Mr Lane has benefited from proceeds of crime for the illegal felling.  He will be sentenced at a later date.

Mr Lane is appealing his conviction.