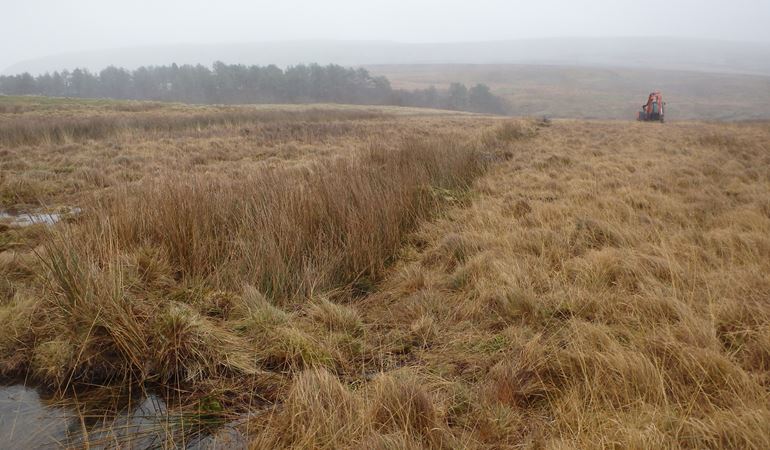 Natural Resources Wales (NRW) and National Trust Cymru have been restoring important peat habitats on the Migneint, a moorland in central Snowdonia which includes Llyn Conwy, the source of the River Conwy.

The restoration work, which includes the blocking of manmade ditches, prevents the erosion of peat and stops peat particles being carried into the river where they have an adverse impact on salmon, sea trout and brown trout eggs.

The restoration started in 2005 and so far more than 400km of ditches have been blocked through the project, assisted by a number of partners working alongside tenant farmers.

Partners include Fferm Ifan, the RSPB, Snowdonia National Park Authority and the Centre for Ecology & Hydrology.

Blocking ditches re-wets the land either side of the ditch, allowing vegetation including sphagnum moss to grow.

The moss covers bare peat and acts like a sponge, slowing down the natural flow of water, allowing for the natural filtering out of particles which would otherwise enter the River Conwy and be deposited on river gravels where fish lay their eggs.

The ditches were originally dug in the 1950s to drain the land for sheep grazing and to enable grouse shooting.

Water quality monitoring conducted by NRW after the restoration work shows the number of particles in the river water has noticeably reduced.

Monitoring also shows the number of fish in the river has increased.

“It is important spawning areas remain clean and are not blocked up with sediment, as the eggs stay in the gravels from winter to spring and need a good supply of oxygen to survive. In spring, the eggs hatch and the fish swim out of the gravels.

“Following this restoration, we have been carrying out fishing surveys in the Upper Conwy and have seen a significant increase in the numbers of juvenile salmon, which bucks the general Wales-wide declining trend.

“This work has multiple benefits, restored peat areas help provide and connect habitats vital for threatened species such as Curlew and large heath butterflies as well as improving water quality and slowing the flow of water which provides drought protection and flood risk mitigation.

“It also reduces the risk of wildfires as the land is wetter and increases the land’s carbon capture.

“This is part of NRW’s work to address both the biodiversity and climate crisis using cost-effective, natural approaches to tackle some of the UK’s biggest environmental challenges.”

The report found that in 2021, Wales recorded the lowest catches of both salmon and sea trout since consistent records began in 1970s.