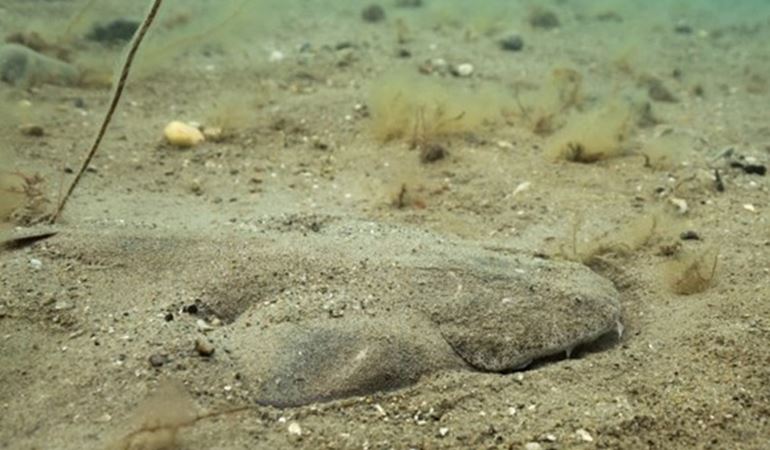 A new approach to collecting data on the Critically Endangered and elusive Angelshark around the Welsh coast has proven successful.

Crucial data, published in a paper today, 05 July 2022, were primarily sourced by commercial, recreational and charter fishers across Wales and the Irish Sea in an approach co-designed by the fishing community and Angel Shark Project: Wales - a project led by Natural Resources Wales (NRW) and ZSL (Zoological Society of London).

Angelsharks are one of the most threatened families of shark, skate and ray in the world, and were thought by some to have disappeared from our coastline. The paper reveals new information about the species and how it uses coastal waters around Wales, confirming that there is still an important Angelshark population in Wales, which could be using the region for reproduction.

The data provides an important baseline understanding to support ongoing investigations of the species’ ecology and work towards a thriving population of Angelsharks in Wales.

“Before Angel Shark Project: Wales, there was nowhere for anglers and fishermen to record Angelshark catches. They are extremely keen to help with projects and share data with scientists to better understand the species around the Welsh coastline.

“Anglers in our association and charter boat skippers were so pleased that results were regularly fed back so they could see how their information was being used. It’s fantastic that fishers’ input has provided such insightful information – we’re looking forward to learning more about Angelsharks in the future”.

Angelsharks are particularly difficult to study due to their rarity and cryptic behaviour. They spend most of the time buried in soft sediment on the sea floor and are extremely well camouflaged, making them hard to spot in visual surveys.

The new records confirm that Angelsharks use shallow habitats around the coast of Wales, with most occurring within six nautical miles of the coast. The coastal area between Bardsey Island (Llŷn Peninsula) and Strumble Head (Northwest Pembrokeshire) had the most Angel shark sightings (1,279) with other notable concentrations in Carmarthen Bay, Conwy Bay, and the Outer Severn Estuary.  June, July, August and September were the most likely months to encounter them.

“Working with fishers has been vital in collecting new information about Angelsharks in Wales. Commercial, recreational and charter boat fishers are so knowledgeable about the seas they work on, it can’t be learnt in the same way by anyone else. We are very grateful to everyone who took their time to talk to us and share their records.

“With a total of 2,231 records, 97% of which were provided by fishers, we can confirm that Wales holds an important Angelshark population - one of the last remaining in the Northeast Atlantic.”

“From reviewing the fishers’ records, we now know that environmental variables play a big role in how likely an area is to host Angel sharks. The water’s depth and salinity, concentration of chlorophyll and its temperature all play a part. The data also suggests that Angel sharks could move nearer to the coast during summer to give birth – but we need more evidence to confirm this.

“Thanks to the fishers and everyone involved for their hard work – it’s been the key to unlocking incredible information about Angel sharks, which will help us to safeguard the future of this species in Wales.”

Fishers’ data, insights and feedback were at the heart of this tranche of research. They shared their historical records, and accidental encounters since they became a protected species, which enabled significant progress on understanding how Angel sharks use the coastal waters of Wales.

Meetings, semi-structured interviews, and regular two-way feedback helped fishers to share data on the species they encounter in a way that Angel Shark Project: Wales could scientifically analyse.

142 anecdotal resources from communities and archives also added important context, which were used to help interpret results of scientific research, dating back to 1812.

The success of the project has brought about Project SIARC (Sharks Inspiring Action and Research with Communities), launched in February this year, which is expanding the approach to look at four species: Angel shark, Common Stingray, Spurdog and Tope. It includes a wide-reaching schools programme and further opportunities for citizen science among coastal communities. The work builds towards resilient marine ecosystems in the context of the climate and nature emergencies.