Conviction for an illegal waste operator in south west Wales 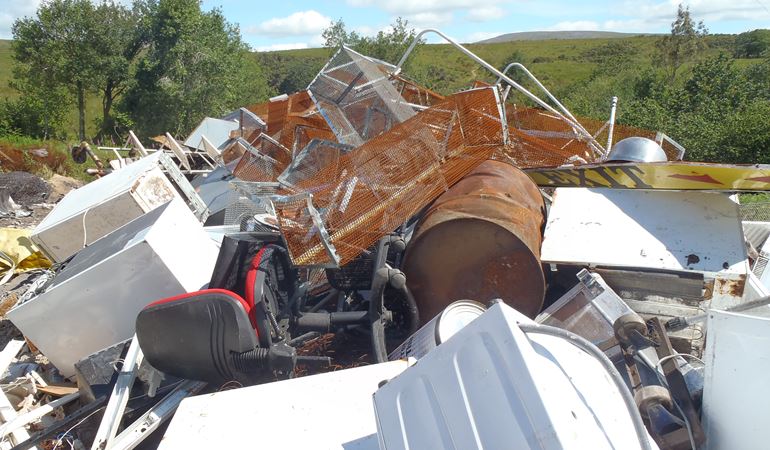 James Anthony Gunter, aged 32, from Brynamman, admitted the offences in interview, and was charged with operating an illegal waste facility and disposing of waste at that facility in a manner likely to cause pollution to the environment and human health.

He was sentenced at Llanelli Magistrates’ Courts on Friday 31 July. Gunter received a 12 month community order with 200 hours unpaid work. He must pay costs in full of £6,709 and a victim surcharge of £85.

He’d been operating a household clearance and rubbish removal service  in the Ammanford, Neath, Port Talbot and Llanelli areas.

He was taking money from customers to take away their waste and was bringing it back to a site in Brynamman, Ammanford, to dispose of it illegally.

“Illegal waste activities like this blight the countryside, have a detrimental impact on people’s lives with issues including smoke or noise, and impact on legitimate waste businesses.

“Gunter left more than enough evidence to lead us to him. Amongst the mostly burnt waste we discovered numerous documents with addresses on. We also found a sign from an old local business. Thankfully, we could trace these items back to their place of origin, and the producers of the waste were willing to give witness statements.”

The investigation began in June 2019 when the Waste Regulation Team received a number of reports of the illegal waste operation.

Large volumes of waste were regularly being tipped and burnt at a location, on the border of Brecon Beacons National Park.

NRW’s enforcement officer and an officer from Dyfed-Powys Police who was on secondment to NRW at the time, visited the site. From that visit and follow-up enquiries they found substantial amounts of evidence that led to this successful prosecution.

“We rely on our communities to share information with us to target and tackle crimes of this nature, which have a significant impact on local people and the environment.  We will continue to work with partner agencies to effectively deal with offenders and to keep our communities safe.”

“Thanks to people reporting this operation to us, we were able to investigate and prosecute. But members of the public have another important role to play in preventing illegal waste operations.

“If they arrange for waste to be collected from their business or home, they should check that the business collecting it is registered as a carrier. Search the public register of all waste carriers, brokers and dealers on the NRW website.

“If they’re not registered, don’t let them take the waste away and report them immediately to NRW on our incident line 0300 065 3000.”