Continue
Home > About us > News and events > Blogging from our special places! 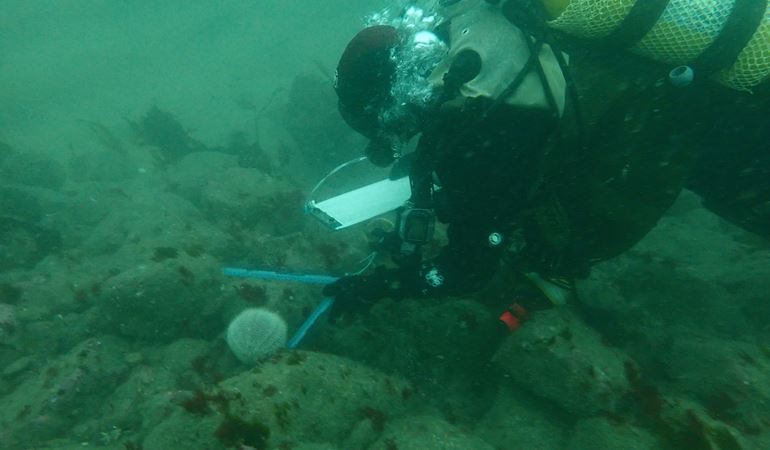 Each month our teams write a blog about the special places they look after. Here, Kate Lock, Marine environmental assessment officer, talks about the humble urchin and why it is so important.

It is spherical in shape and blue, pink or purple in colour. It has an outer layer of skeletal plates that join together to form a shell 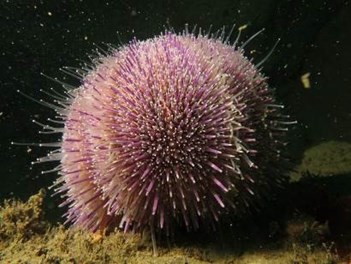 arranged in five rays. The shell is covered in hundreds of sharp mobile spines and along each ray are rows of hydraulic tube feet each ending in a sucker disc. It also has a complex dental apparatus which operates five jaws that project from the mouth.

One could be easily mistaken to believe that an alien species has just landed from space, however this is simply describing the ‘Common Sea urchin’ Echinus esculentus found all around the British Coast.

Sea urchins are the ‘rabbits’ of the marine world - feeding on seaweeds and encrusting animals, efficiently hoovering the rock surface bare.

By efficiently vacuuming rock surfaces bare they make space for larvae of different species to settle on the rock and, as a result, help boost diversity in the marine environment.

Sea urchins were collected from Pembrokeshire during the 1960’s and 70’s as diving became popular. The animal was removed from the shell, bleached and dried to keep or sell as a souvenir.

Sites around Skomer Island were heavily targeted, and concerns grew about the ecological effects of the apparent over collection. This triggered the first suggestions that there was a need to conserve the marine area surrounding the island, and by 1971 a marine reserve was proposed by a group of naturalists and biologists from the Field Studies Council.

The results showed that the numbers were similar to commercially exploited populations in Devon, and lower than those from other non-exploited areas around the UK. Luckily collecting of marine curios in the UK stopped in the early 1980’s.

The first urchin survey (since the designation of the Skomer Marine Conservation Zone) was completed in 2003.

Fixed survey sites were established with a range of habitats and depths along the north and south coasts of the island and the north coast of the mainland.

We continue to carry out this survey every four years with a team of volunteer divers. The efforts of the volunteer diving teams are incredibly valuable because we can survey a vast area over 2 weekends. Gathering data about urchin distribution, abundance and size.

In June this year 40 volunteer divers covered 8400m2 and measured 949 urchins. This valuable data will be entered and analysed in the winter and compared to previous survey results.

Long-term monitoring provides evidence on state of the natural environment

The Skomer MCZ is home to the most comprehensive marine species and community monitoring programme in the UK. 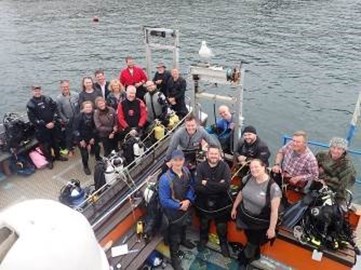 Concerns about the humble urchin kick started marine protection around Skomer Island, and 48 years later the Skomer Marine Conservation Zone (MCZ) can boast to be one of the most intensively studied marine area in the UK.

The urchin survey is just one of a programme of marine monitoring projects undertaken at Skomer MCZ. We also monitor the weather and water conditions like sea temperature, which influence the wildlife of the site. Our biological programme gathers evidence and information on life on the shores and underwater allowing us to report on the health of the marine environment.

Sign up to receive monthly updates from Natural Resources Wales

Is there anything wrong with this page? Give us your feedback.