Blog from the bog – Peat Bogs: A Climate Crucible 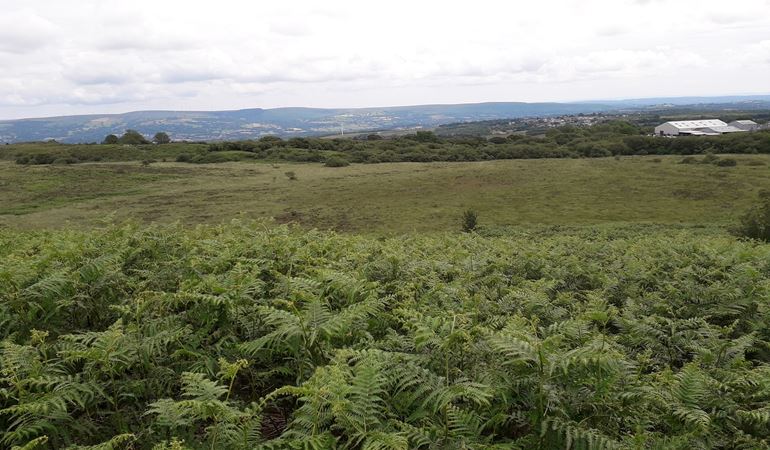 Professor Davies’ research over the last 50 years has focused on the dynamics of weather-​related flow phenomena, numerical weather prediction, atmospheric transport processes, and the linkage between weather systems and climate variability.

In this guest blog he talks about the work happening at Cernydd Carmel and its importance in addressing the climate emergency.

Environmental issues and climate change have rarely been out of the headlines during the last year. In the early months of 2021, devastating wildfires were seen in Australia, deadly floods in Germany and an unprecedented heat wave in Western Canada.

This was followed by the latest assessment of the Inter-governmental Panel on Climate Change (IPCC) that documented the observed change, provided scientifically well-founded but dire projections of future change, and declared unequivocally that the cause was linked to the burning of fossil fuels.

All this provided a poignant backdrop to the recent COP26 meeting in Glasgow when countries were urged to pledge and work together to develop appropriate remedial actions to protect the natural environment and ameliorate the effects of climate change.

One encouraging outcome of the meeting was the pledge by 12 countries to support financially and to collaborate effectively to halt and reverse forest loss and land degradation by 2030, and thereby counteract global warming by enhancing the land surface’s ability to capture the CO2 from fossil fuel emissions.

It is perhaps understandable that rather less attention has been paid to a recent announcement of the UK’s candidate site for world heritage status. And what is this site that could in future rank alongside the awe-inspiring Grand Canyon and the Great Barrier Reef? It is the most intact and extensive blanket bog system in the world, the Flow Country in Scotland.

This vast expanse of blanket bog stretches across Caithness and Sutherland in the far north of Scotland and is a complex set of interlinked pool systems and micro features. It not only hosts an eye-catching flora and fauna but also plays a vital role in our defence against the effects of climate change.

Thus the selection of a peat bog is most assuredly justified, and it threads together the issues of extreme weather events, climate change, protection of the natural environment, forestation and carbon capture.

The linkage is delightfully illustrated by a far-sighted Natural Resources Wales LIFE Welsh Raised Bogs Project. It aims to combat the effects of decades of peat bog degradation and drying out of seven prime examples of raised bog habitats in Wales and to restore them to a better condition.

The degradation - the loss of mosses and sedges and the startling scale of the drying out itself - has been very evident as I have observed (and sometimes traversed) one of these seven sites for more than half a century – Cernydd Carmel.

Cernydd Carmel is a small, raised bog site near Crosshands in South Wales. It covers 7 hectares and is part of the wider Mynydd Carmel Site of Special Scientific Interest and Special Area of Conservation which is 360 hectares in total.

The LIFE Welsh Raised Bogs project has been doing some restoration work on the site recently by removing scrub and cutting Molinia grass that is dominating the site.

There are also plans to build low contour bunds, which will hold more water on the raised bog dome, keeping the site wetter for longer. These are ideal conditions for important sphagnum plants and will help them establish and thrive on the site.

The restoration accomplished by the LIFE project, if replicated globally, will have consequences far beyond the recovery of moss and sedge and the provision of an enjoyable and distinctive environment for people. Peatlands are in effect a veritable climate crucible.

Peatlands cover only some 3% of the planet’s land surface yet they, particularly moss-dominated bogs, store approximately 30% of global soil carbon. This amounts to twice as much carbon as stored in the planet’s forests.

There is not only a desperate need to prevent the release of the stored carbon in peat bogs in a changing climate, but also to maintain and where possible enhance their sequestration properties.

This will entail monitoring and responding to changes in their vegetation, assessing and limiting (and conceivably exploiting) the impact of expected extreme weather events.

Research and analysis of peat cores obtained from peatlands provides in-situ information on past climate conditions. Evidence of past climate change events such as periods of very heavy prolonged rainfall and extended drought conditions can be tracked back down through the peat cores and gives an insight into future climate event patterns.

These objectives will require us to use existing scientific knowledge and promote research directed at better understanding peat bog eco-systems, alongside increasing tree cover, maintaining our farming capabilities; and carrying out sensitive public engagement.

Find out more about the LIFE Welsh Raised Bogs Project