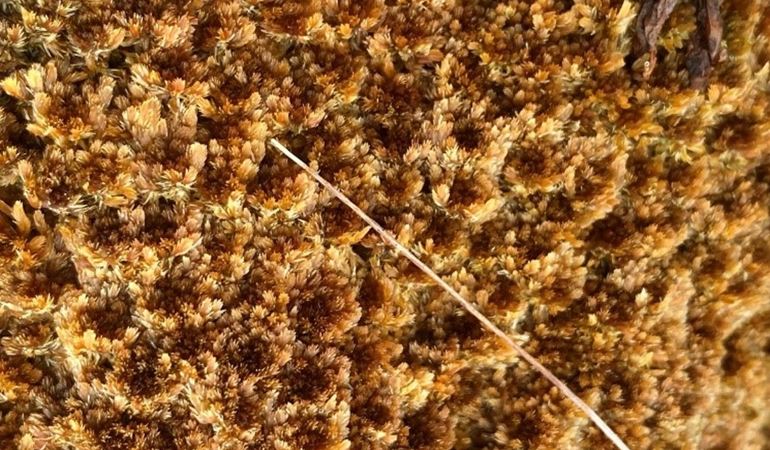 Monitoring work done as part of the Natural Resources Wales LIFE Welsh Raised Bogs Project has led to the rediscovery of a rare bog moss on one of the projects’ sites in north Wales.

Dave Reed is currently one of Natural Resources Wales’ Senior Environmental Assessment Officers but made this discovery during his role as Senior Peatland Advisor. Here he explains his role supporting the LIFE project, how he identifies bog mosses and what this means for the sites.

As Senior Peatland Advisor my role involved providing expert advice to developers, nature reserve/SSSI managers and landowners on anything that impacted on deep peat across Wales. So, anything from informing windfarm infrastructure so that it has no/less impact on deep peat and hydrological flows within the infrastructure layout and restoration design to bring peat bodies into favourable hydrological status on the previously mentioned national infrastructure projects, but also nature reserves and SSSIs. It also included site specific surveys of the vegetation and peat body condition which utilised my 17 years with the Lowland Peatland Survey of Wales.

I have been supporting the LIFE Welsh Raised Bogs Project since it’s inception in 2018 with large inputs into the mapping of previous restoration work on sites and calculating areas of both active raise bog and degraded raised bog at each of the seven sites.  Since then I have been  travelling across Wales to monitor and record important plant species and hydrology on all seven project sites before any of the management interventions take place.  This gives us a very important before picture of how our SAC raised bog sites were floristically and hydrologically before restoration.

In this instance I have been nanotope monitoring Cors Goch raised bog near Trawsfynydd. Cors Goch is a 284hectare site near Trawsfynydd village to the south of the dam and lake before extensive contour bunding occurred to raise water tables to a more favourable level through the year.

Nanotope structures and their arrangement into a surface micro-relief (microtope) together give some of the clearest available signs of peat bog hydrological condition without using water level recording devices such as dipwells or piezometers.

Microtope monitoring is the separation of the different types of nanotope into either terrestrial (T) or aquatic (A) features. They are then numbered sequentially in their vertical distance away from the average water table.

Random points are visited within each nanotope area that have been generated through studying historical aerial imagery looking for homogenous areas of vegetation that vary through species composition and structure.  The different microtope zones that occur at each location and % area they cover is recorded onto recording forms.  Set species combinations are recorded for each microtope, which give an indication as to how favourable a condition the bog surface is in, in relation to its current hydrology.  Species lists are then written for each zone. On a re-visit several years in the future after restoration management has occurred, the same information is again recorded at the same point.

By doing this type of monitoring you would hope to see a movement or a change into a more favourable condition from the categories recorded.  For example, if a point had 30% T3 mound, 40% T2 high ridge, 20% T1 low ridge and 10% T1:A1 at baseline, but then had 30%:25%:30%:25% cover of the same microtopes at the 5 year monitoring interval, you can easily see that the bog surface has become wetter and thus in a more favourable condition.

During last winter whilst out microtope monitoring on the southern dome of Cors Goch Trawsfynydd, two mounds of rare rusty bog-moss (Sphagnum beothuk) were discovered.

A couple of stems from each mound were collected and positively identified under the microscope. These were then sent away and verified by the National Sphagnum referee Mark Hill as being Sphagnum beothuk.

Sphagnum beothuk (formerly Sphagnum fuscum) was last recorded in the area around Trawsfynydd in 1978 and between those dates the only known site for the species in Wales has been Cors Fochno, where there is a very healthy population.

It is relatively widespread in both Ireland and Scotland but has been declining in recent years due to habitat degradation and potentially too much atmospheric nitrogen.

It is a distinctive mound forming species, forming very dense mounds up to 50cm high and are a very characteristic gingery-brown colour with the plants having brown stems. This picture (below) clearly shows the gingery-brown mound that is characteristic of rusty bog-moss (sphagnum beothuk) on the southern dome of Trawsfynydd.

Close-up of the mound (below) showing the gingery-brown colouration and densely packed stems that give the mounds their dense feeling. 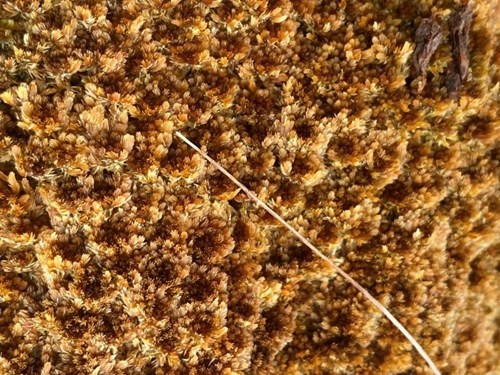 Four new mounds of the rare Austin’s bog-moss (Sphagnum austinii) were also discovered during the LIFE project work on the southern dome of Trawsfynydd. Sphagnum austinii is locally frequent on Cors Fochno and although it’s not increasing greatly on the site it is holding its own (see picture below). 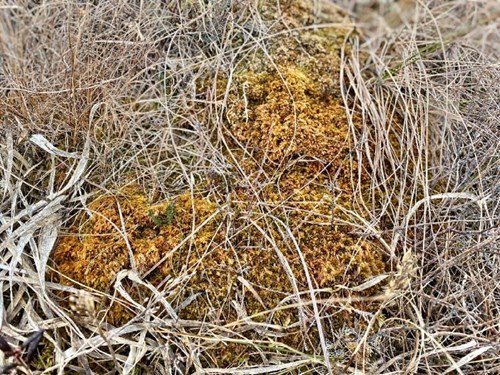 A detailed transect survey for the beothuk and austinii has since been carried out, the results are currently being verified by the National Referee.

To keep up to date with the LIFE Welsh Raised Bogs Project please go to our Facebook page @CyforgorsyddCymruWelshRaisedBogs or the Twitter page @Welshraisedbog or visit our website https://naturalresources.wales/liferaisedbogs