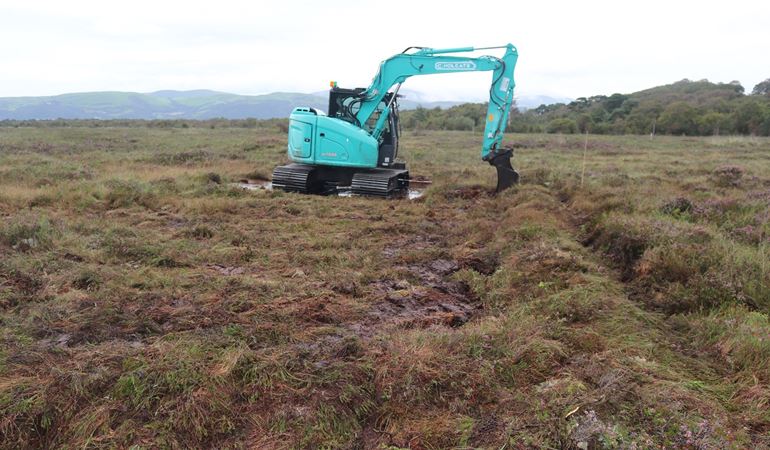 The low-level banks of peat will be created on two rare raised bog sites in Ceredigion this August by the LIFE Welsh Raised Bog (WRB) Project.

The 40-mile (64km) stretch will be the largest amount attempted by any peatland project in Wales.

Low-level banks of peat, or bunds as they are often called, will be a vital part of the restoration work done by the LIFE WRB Project.

The bunding work will help to restore natural water levels on the raised bogs, making them wetter and creating areas where important sphagnum (bog moss) can establish and thrive.

The work will begin in the next few days on two raised bog sites in Ceredigion, Cors Caron National Nature Reserve (NNR) and Cors Fochno which is part of the Dyfi NNR.

Both sites have suffered due to a complex history of management, and as a result, the peat bogs have become drier.

Cracks and holes have developed in the dried-out peat, which has allowed invasive plants like purple moor grass and rhododendron to take over, crowding out important plants like sphagnum mosses, sundews and rare sedges.

Sphagnum forms the building blocks of raised bogs and as it slowly decomposes under waterlogged conditions it forms dark brown peat soil. A diversity of sphagnum is a sign of a healthy bog, and the peat it creates naturally absorbs and stores tonnes of carbon from the atmosphere, helping in the fight against climate change.

“In the past, bunding has taken place on a smaller scale by peatland projects across the UK, this is the first time a project in Wales has attempted to do this type of work on such a scale.”

The bunds will be approximately 25cm high and follow the natural contours of the raised bogs domes. This will improve water levels on the bog dome with the objective of stabilising it to within 15cm of the bog surface.

It is estimated that by creating the bunds, re-profiling existing bunds and carrying out scrub and other vegetation removal - almost 622 hectares (equal to 622 rugby pitches!) of bog habitat will benefit and be returned to good condition.

Peatlands in good condition provide many of the things which society relies upon; clean water, flood protection, carbon storage from the atmosphere, and are also great places for people to enjoy the outdoors.

Wildlife will also benefit from this restoration work, for example feeding areas for birds like redshank and snipe will increase, and the creation of shallow sphagnum pools will be perfect breeding areas for rare invertebrates like the small red damselfly during the spring and summer months.

“Visitors to the sites might see large specialist machinery over the autumn and winter months, so we’re trying to make visitors aware of the work in advance so that we don’t cause any undue concern.

“The specialist machinery has extra wide tracks to help them float on the bog, whilst working methods of using bog mats under the machinery will also reduce the impact to the fragile bog surface.”