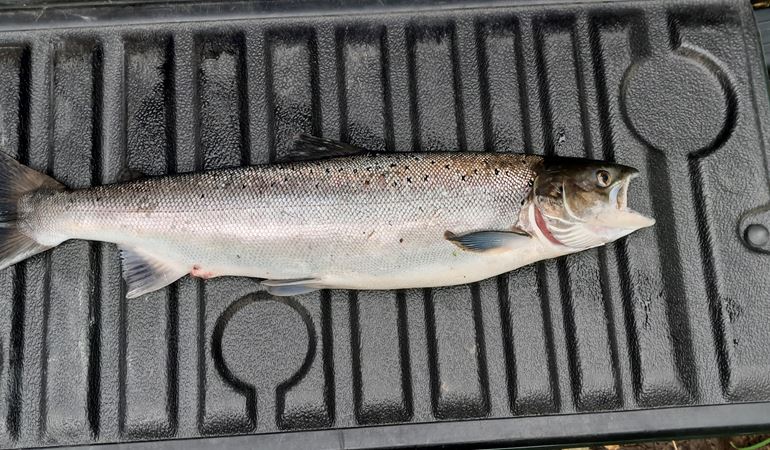 After failing to attend two court hearings, a Carmarthenshire man has been found guilty of fishing offences at Llanelli Magistrates Court and has been ordered to pay almost £3,000 in fines and costs.

It is a legal requirement in Wales, that any salmon caught are released alive back into the river and that anglers who target migratory fish such as salmon and sea trout (sewin) must use de-barbed or barbless fishing hooks.

Mr Davies, who had caught the salmon by the time he was approached by the officers, was attempting to put the fish back into the river. He showed a very poor catch and release practice, which would have contributed to the death of the fish if it had not already died due to the damage caused by the illegal barbed hook.

The fish was seen floating down the river immediately after being released by Mr Davies.

After the dead salmon was recovered from the river, officers witnessed fatal gill damage injuries to the salmon that were caused by the barbed hook used by Mr Davies. The NRW Officer instructed Mr Davies to de-barb and flatten the barb on his fishing hook, which he duly did.

Mr Davies made no attempt to attend his first summons to Llanelli Magistrates Court hearing and also made no effort to attend the second hearing which was re-arranged for him on 22 April 2022.

The case was made against Mr Davies in his absence, and he was found guilty by the court Magistrates.

The court fined him the maximum amount available to them for the charge and awarded NRW the full costs of the investigation.

“This incident is a case study in how not to fish for migratory fish such as salmon and sea trout. Mr Davies was experienced and well versed in the angling byelaws, but still knowingly used an illegal method to catch the salmon. Mr Davies displayed shockingly poor technique in trying to release the salmon and showed no respect for fish welfare.

“He represents a very small portion of the angling community on the Tywi catchment, and I urge anyone who isn’t sure of the angling rules, or of the best practice catch & release techniques to visit our website.

“Every single salmon that reaches its spawning beds is highly important to the river Tywi catchment and to the passionate angling communities who visit.

“The female ‘hen’ salmon that died because of Mr Davies’ actions may have contributed nearly 5000 eggs if it had spawned in the higher reaches of the Tywi catchment. These lost salmon eggs represent an important loss for a river catchment which is already not meeting its spawning targets for successful future fish stocks.

“I would like to thank our Dyfed Powys Police Wildlife Crime Officer for his continued help within our fisheries enforcement teams and also in prosecuting this case.”

If you see any suspicious or illegal activity on our rivers, please report it to the NRW Incident Hotline on 0300 065 3000.