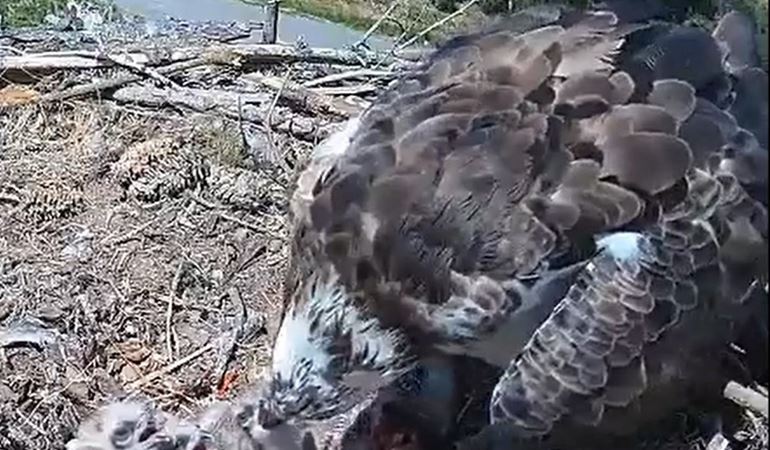 The camera equipment that this year live-streamed footage of the nest of the Llyn Clywedog Ospreys for the first time has been removed for the winter.

It was installed before the ospreys' annual arrival in March and caught every major milestone during the season from their arrival to their departure.

Installed by contractors on behalf of Natural Resources Wales (NRW), the camera offered a live close-up view of the nest for the first time.

Rhys Jenkins, NRW Land Management Team Leader said: "We could not have picked a better time to start the live stream. We timed the installation to be in place before the first osprey arrived, but in the months of planning beforehand, we never could have known that the live stream would coincide with a global pandemic and national lockdown.

"It provided people with an important link to nature during the lockdown period and has been very well received, especially by a dedicated group of enthusiasts who constantly had an eye on the footage.

"The camera gave us a close-up look at an extremely successful year on the nest, from the arrival of a new female and bonding with the resident male, to the chicks hatching, flourishing and fledging.

“Every egg that was laid, every chick that hatched and fledged was a cause for celebration, and we are very hopeful that we will see more of the same next year from these rare and special birds.”

The live stream gave everyone privileged access to seeing ospreys raising and fledging three healthy male chicks. Footage showed the range of fish they caught to feed the chicks which even included a mullet caught at the coast, 13 miles away.

NRW officers will now discuss the performance of the camera with the contractor and consider and any improvements that can be made before the camera is put back in place in the spring.