Larch to be felled in Coed Moel Famau forest 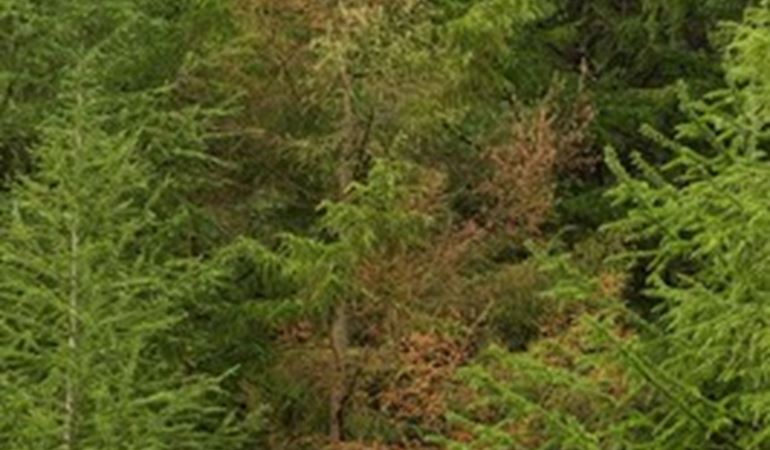 An operation to remove diseased larch trees from a popular forest in the Clwydian Range will now begin from January 2021.

Natural Resources Wales (NRW) estimates that a total area of 10 hectares – roughly the equivalent of 10 rugby fields – of larch will need to be felled.

The trees are infected with Phytophthora ramorum commonly known as larch disease. In 2013, surveys identified that the disease was spreading rapidly across forestry in Wales, sparking a nationwide strategy to remove diseased trees to stop it spreading further.

Work will begin at the Moel Famau forest which will see contractors fell the Japanese Larch trees that have been infected by the fungus.

Lorries will remove timber during weekdays with loads  transported via NRW’s existing private haulage roads and the public highway.

To allow them to do this safely and efficiently, NRW will need to temporarily close or divert some of the trails in the forest from visitors. This is for the safety of the public and in order to reduce any further transmission of the disease.

“We don’t like to close off access to our forests, as we know how valued they are by local people, but in this case it’s the best solution to get the work done safely and without delay.

“We’ll do everything we can to limit the disruption caused by the work, and where it’s safe to do so, we’ll reopen areas of the forest as the operation progresses.

“Larch disease has had a dramatic impact on our forestry in Wales, and this will be particularly prominent in Coed Moel Famau.

“It’s unfortunate to have to fell trees, but it does provide us with an opportunity to redesign the forest for the future. After the felling is complete, we intend to plant new trees, including a mixture of native, broadleaf species which will start the regeneration of areas of native woodland and a more diverse range of conifer trees, which will help the forest be more resilient so it can continue to be enjoyed for many years to come.”

Whilst the felling work is being carried out, NRW is asking people to please adhere to footpath closures and follow signs and diversions for their own safety. Failure to do so could put visitors at risk and may result in delays to the work taking place and in reopening the forest.