Diseased larch trees to be treated and felled in Coed Llangwyfan 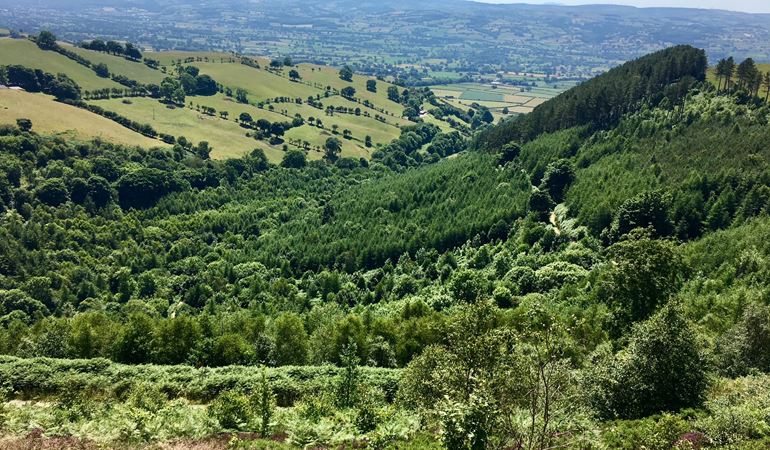 Diseased larch trees will be treated and felled in a forest near Denbigh during the next 12 months, Natural Resources Wales (NRW) has said.

The forest - which is situated in the Clwydian Range and Dee Valley Area of Outstanding Natural Beauty (AONB) - clings onto a steep-sided hill that opens out to heather covered slopes between the county borders of Denbighshire and Flintshire.

Trees in the forest are infected with Phytophthora ramorum, commonly known as larch disease. In 2013, surveys identified that the disease was spreading rapidly across forestry in Wales, sparking a nationwide strategy to remove diseased trees to stop it spreading further.

It is estimated that around 5.5 hectares (just over 5 rugby fields) has been infected and those trees will need to be treated with a chemical stem injection before the end of August. Following injection, the treated trees won’t flush in the spring, so there will be a visual and amenity impact until they are felled in 2022.

After the felling has taken place, the clear-felled sections will be replanted with native broadleaf tree species. This will eventually restore ancient woodland features to the area and will help local biodiversity to flourish.

“It’s unfortunate that the only option we have to limit the spread of the disease is to destroy and fell the larch trees. We fully appreciate that this will have a visual impact on the area.

“The trees will be treated with the chemical stem injection before the end of August 2021 to ensure that we comply with the Statutory Plant Health Notice. This part of the work will cause minimal disruption for residents; however, we will be updating residents as further information on NRW’s felling operations becomes clear during the next 12 months.”

This action is necessary for two key reasons. Firstly, the trees will eventually die if left to stand and will pose a safety risk to people who use the forest if they are not removed.

Secondly, NRW is legally required to comply with a Statutory Plants Health Notice that has been placed on the forest which requires that the affected trees are destroyed in order to prevent further spread of the disease.

“It is very unfortunate that Larch disease has been identified at Coed Llangwyfan.

“The Council and the Clwydian Range and Dee Valley AONB will be working very closely with NRW to minimise the impact in terms of biodiversity and access.”

NRW in partnership with Clwydian Range and Dee Valley AONB have arranged three drop-in sessions at Coed Llangwyfan prior to work beginning, giving the public an opportunity to ask questions and allow officers to explain the scheduled work and how it will be managed during the next 12 months.

The drop-in sessions will be held on the following dates and will begin at the top main car park at Coed Llangwyfan:

If you do have any concerns regarding the scheduled works at Coed Llangwyfan please contact North East Wales’ Forest Operation Team on 0300 065 5070 or email ForestOperationsNE@cyfoethnaturiolcymru.gov.uk.