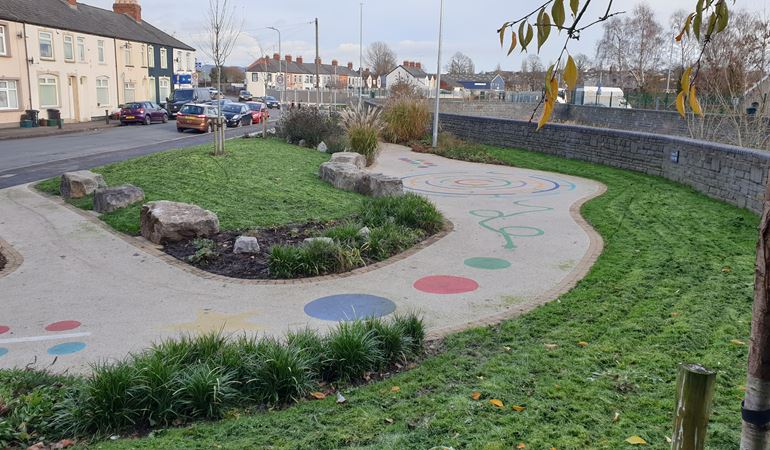 Construction work has finished on a £14m flood protection scheme in Newport, with more than 660 homes protected from the risk of increased flooding.

Work on the Crindau Flood Management scheme – backed by Welsh Government funding and led by Natural Resources Wales (NRW) – was carried out to defend homes in the Crindau area of Newport from the flood risk from the Crindau Pill and the nearby River Usk.

The Crindau area has a long history of flooding, with the area susceptible to tidal floods.

Earlier temporary defences were in a poor condition, and in 2014, the Welsh Government approved funding for NRW to deliver a new scheme.

The flood scheme, comprising sheet pilings, new walls and new embankments was built along a 2.6km stretch of the river, between the Great Western Railway Usk Bridge and the M4.

The scheme has been designed with climate change and predicted sea level rise in mind, allowing it to be adapted as necessary in future.

As part of the project, a number of other improvements have been made for the benefit of the community – including new footpaths, cycle paths, public seating areas and a new amenity area on Albany Street, which includes new trees and planters; raised areas, blockstones and a children’s fitness trail.

Elsewhere in Newport, plans are also in hand for another scheme on the Usk to protect more than 2,000 properties in the Liswerry area.

“I am very pleased to note completion of the Crindau scheme, which will provide a great deal of reassurance and safety to those in the neighbouring area.

“Last month’s flooding was a clear example of why we need to do everything we can to mitigate and manage the flood risk posed to communities across Wales. I am also pleased to note that the Crindau scheme has already helped to defend the neighbouring community from storms and record rainfall.

“Projects such as these form a key part of our flood Strategy as we face the increased risks posed by the climate emergency.

“Between 2016 and 2021, we have invested £390million into schemes and projects to manage flood risk, reducing risk to more than 45,000 properties throughout the country.

“We look forward to the completion of schemes similar to those at Crindau across Wales in the future, and would like to thank Natural Resources Wales and contractors for their work on site.”

“Just recently again we’ve seen how devastating flooding can be, as Storm Christoph – the second named storm since Christmas – wreaked havoc across the country. We are advised that with climate change, these kind of events are likely to become more frequent, and we hope that the completion of this scheme at Crindau provides residents with some reassurance.

“It’s been a complex operation to manage with a large number of landowners involved, and I’d like to take this opportunity to thank everyone who has contributed and allowed the scheme to succeed. Our thanks must also go to the community themselves and Newport City Council for their patience and support over the last few years.

“Schemes like this can make a huge difference to communities at risk of flooding, but it’s also important that we all continue to take our own personal action to keep safe.

“Finding out if your home is at risk should be the first step, then checking to see if you are eligible for free flood warnings. Visit the NRW website, or phone Floodline on 0345 988 1188, for more information about how you can prepare.”

Members of the public may check their flood risk by zooming into their location on NRW’s flood risk map.

The map also highlights the areas which are covering by the free flood warning service.