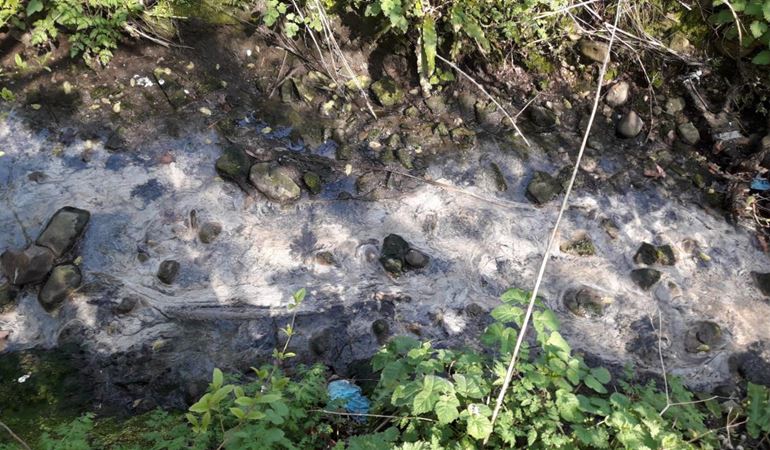 The company was fined £26,300 on 14 January 2022 at Cardiff Magistrates’ Court after pleading guilty to polluting the stream with wastewater from its bakery on Maes-y-Coed Road.

NRW officers found the pollution entering the stream from a pipe connected to an industrial dishwasher at the site.

The dishwasher had wrongly been connected to the surface water sewer, rather than the foul sewer. This caused 800 litres a day of dirty wash-waters, including butter, sugar, flour and egg, to flow into the stream.

The company has since fixed the wrong connection and now all its wastewater enters the foul sewer and is sent to a treatment plant.

NRW was made aware of the pollution in April 2019 by member of the public reporting sewage type smells at the stream in Heath Park.

Officers found 380 metres of the stream covered in sewage fungus, which had caused all the invertebrates along the stretch of the brook to die.

Sewage fungus is a hair-like bacterium that grows in response to pollution entering water. It kills invertebrates by smothering them or using up the oxygen they need to breathe.

“By not ensuring its waste pipes were connected correctly, the wastewater from the Memory Land Cakes site polluted the Wedal Brook for a long time. This resulted in sewage fungus killing all life in the river for hundreds of metres downstream.

“We hope the outcome of this case clearly demonstrates that anyone polluting Wales’ rivers will be pursued through the courts if necessary and could face large fines due to their actions.

“We will continue our efforts to educate people and businesses about the impact misconnected pipes can have on the environment.”