Welsh-first as captive-bred crayfish reproduce in the wild 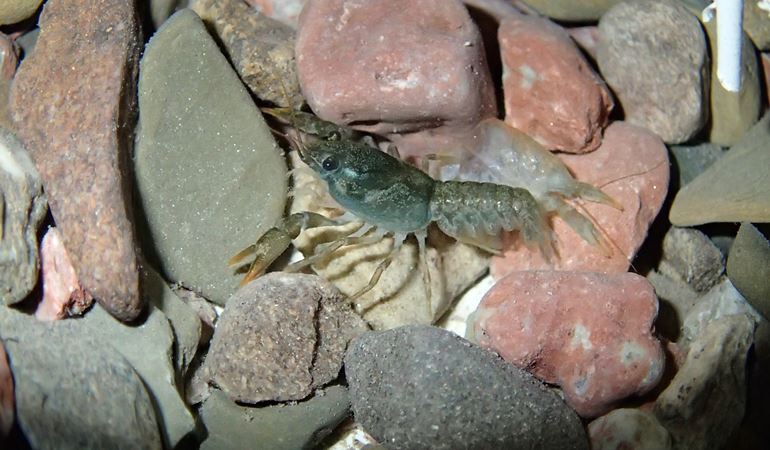 A Welsh conservation programme to save a highly endangered species is celebrating a major milestone after a captive-bred population has successfully spawned in the wild for the first time.

Experts from Natural Resources Wales’ (NRW) released native white-clawed crayfish in a tributary of the river Irfon near Builth Wells between 2012 and 2014.

Now they have found first-generation wild crayfish in the area – demonstrating that a new population has been established.

The white-claw is Britain’s only native crayfish and without intervention the species could become extinct in mainland Britain in 20 to 30 years.

Over the last decade the species has declined by up to 80 per cent world-wide.

In the wild they have less than a 10 per cent chance of surviving to adulthood, compared to around 80per cent in the hatchery.

To date more than 5,000 captive-reared crayfish have been released into carefully selected ‘Ark’ sites in Wales.

The programme aims to offset the damage caused to the native crayfish population by the non-native American signal crayfish, climate change, habitat degradation and the impact of pollution on water quality.

The American signal crayfish, introduced for food production in the 1970s and 80s, carries a plague which affects only the white-clawed species.

“This is a great legacy for the Irfon Special Area of Conservation Project which is led by the Wye and Usk Foundation.

“The project included a number of actions to improve water quality and habitat such as sand liming, restoring a peat bog, coppicing and fencing.

“Finding these wild-born offspring from our captive-reared programme proves that this could be a valuable tool in safeguarding the species for the future.

“Wildlife is an important part of our environment, our heritage and our culture in Wales. The natural resources we are here to protect – our air, land and waters – provide a home to the rich, diverse and valuable wildlife we have in Wales

“The white-clawed crayfish is described as a keystone species, consuming detritus and almost acting as engineers in the aquatic environment.

“Their presence is an indicator of good water quality, as they are very sensitive to pollution, so their continued presence at the release sites is really encouraging.”

“This project was one of the most successful partnership projects we have been involved in.

“The fact that native crayfish reared at NRW’s hatchery are now breeding in the wild is one of the project’s legacies and a testament to the skill and expertise of the staff there.

“It is great news for a species that have been all but wiped out from this catchment due to water quality and habitat problems which have now been corrected, in a large part by this project.”

This project is a small part of the wider work taking place to improve water quality in Welsh rivers.

NRW is working in partnership with a range of organisations to support land managers and farmers so they can prevent pollution, plan for future innovation to improve their businesses and eliminate pollution.