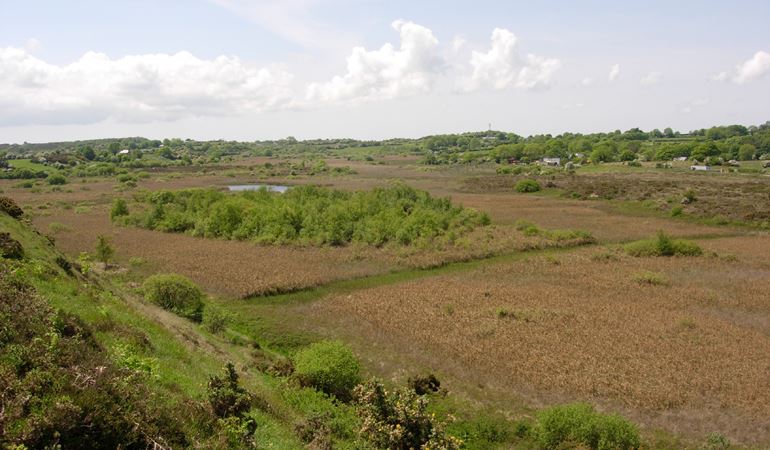 Work to restore Welsh peatlands is showing signs of success – but there’s a lot more to do.

That’s the key message from the Wales Peatland Action Group as the Welsh Government’s Minister for Natural Resources Carl Sargeant prepares to attend the United Nations Climate Change Conference in Paris, which runs from 30 November to 11 December 2015.

Due to damage over many years, Welsh peat is a source of green-house gas emissions, releasing around 550,000 tonnes of carbon into the atmosphere every year. This is equivalent to approximately the annual CO2 emissions of Anglesey or Torfaen.That’s why the Welsh Government has set an ambitious target of getting all peatlands in Wales into restoration management by 2020.

Over fifty per cent of Wales’s semi-natural peatland habitats are now being managed in a sustainable way, helping to lock in carbon that could otherwise be released into the atmosphere contributing to climate change.

One of the biggest problem facing Welsh peat bogs is that ditches were dug across them, mainly between the 1940's and 1980's, to drain them for agriculture and forestry.  When they dry out peatlands release carbon - accumulated in them over thousands of years - adding to man-made greenhouse gas emissions.

Over the last few years, at least 750 km of ditches have been blocked across Welsh peatlands to restore and re-wet them. Key areas include the uplands of Migneint, Hiraethog, Elennydd and Berwyn and lowland sites on Anglesey and the Llyn Peninsula, among others.

“The importance of managing peatlands can’t be over-stated. They don’t just store carbon. Peatlands harbour a wealth of rare plants and wildlife – birds such as curlew and golden plover as well as rare insects and plants. They also help store water which can reduce the risk of flooding in lower lying areas. And they help purify our water supplies.

“There is still a huge amount of work to do – well over half of our peatlands remain in poor condition and there’s still a substantial amount of ditch blocking to do.”

On several sites in Wales, the Centre for Ecology and Hydrology has installed flux towers to measure how much carbon is retained in poor condition peat compared with restored or good condition peat. Cors Erddreiniog National Nature Reserve, Anglesey, was one of the major sites included in NRWs Anglesey and Llyn Fens LIFE project. It is now locking in carbon that would otherwise be released into the atmosphere.

The Welsh Government’s target for peat restoration covers around three quarters of Wales’s total peat area. If fully restored, emissions would be reduced by around 168,000 tonnes every year.

Restoring Wales’s peatlands involves a wide range of partners - including the Welsh Government, NRW, The Wildlife Trusts, RSPB, the National Trust, National Parks, Local Authorities and all the farmers and other land managers so critical to the survival of these unique places.

The new UK Peatland Code was launched in Edinburgh on 23 November to encourage private sector investment into peatland restoration, based on the benefits they provide for society, including biodiversity conservation and locking up carbon.

NRW will continue to work on restoring priority peatland sites, using management agreements with landowners and bidding for European and other funding to continue to restore peatlands. The Welsh Government will also continue to invest in peatland management and restoration.