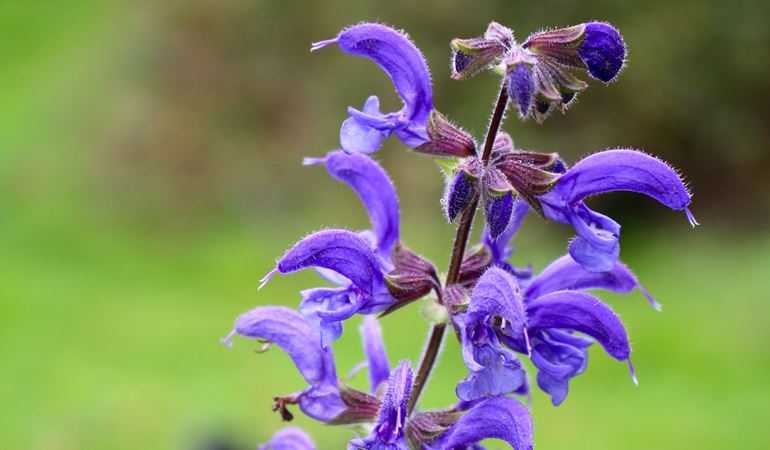 A rare meadow plant with striking blue flowers has been brought back from extinction in the wild in Wales.

The last surviving wild population of Meadow Clary in Wales, at a site in Monmouthshire, was dying out.

But before it became extinct here, seeds were collected and grown at Treborth Botanic Gardens in Bangor, North Wales.

This gave Natural Resources Wales (NRW) and its partners a chance to study the plant and understand why it was in decline.

This discovered that the Meadow Clary population at the Rectory Meadow Site of Special Scientific Interest (SSSI) in Monmouthshire had dwindled due to genetic deterioration. The plants were unable to sustain the population.

The National Botanic Garden of Wales in Carmarthenshire then studied various populations of Meadow Clary, found at only 22 locations across the UK.

Results showed that the germination of the Welsh plant wasn’t as good as other larger and healthier populations.

A plan to cross-pollinate the Monmouthshire plants with others from England and to limit cattle grazing at the site was created.

“The study showed that if the Meadow Clary was reintroduced at Rectory Meadow alongside a number of plants from the healthiest and closest populations in England, it would allow the plant to cross pollinate and establish a genetically strong population that would remain for the future.

“Another important part of this project was a five-year management agreement with the tenant farmer to ensure grazing levels did not hinder the growth of the plant.

“In Wales, one in six plants are considered threatened, so it up to us and our partners such as the National Botanic Garden of Wales and Bristol Zoo Gardens to conserve them.

“The fact that grazing can continue on the site also means that we are helping to conserve this beautiful plant, and at the same time, making sure the farmer can continue to use the site to generate an income.”

NRW has produced a short film to explain the work, and also created a photo album.