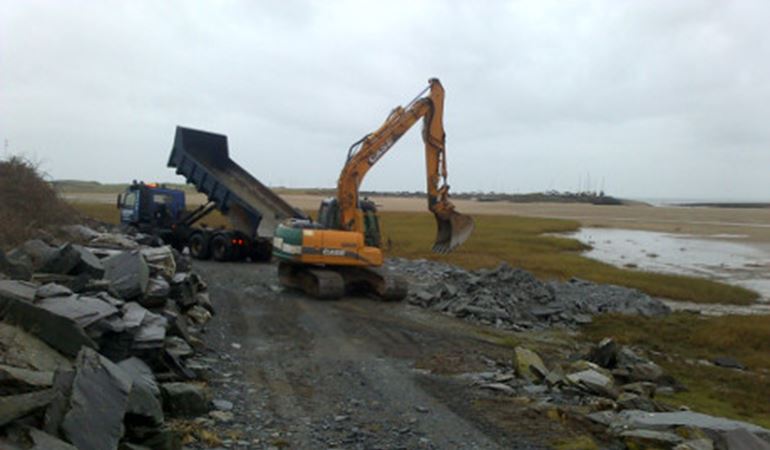 Since the devastating storms that hit communities along the coast of Wales 12 months ago the priority has been to repair and restore defences damaged in the storms.

The delivery plan issued today (5 January, 2015) outlines how the 47 recommendations made by NRW in April 2014, following an in-depth review into the impacts of last winter’s flooding, are being implemented. It details progress to-date and what more needs to be done, by all the organisations involved.

Five of the actions have already been completed with work on another 35 well under way, including:

Work on the remaining seven recommendations will begin in January 2015.

The storms in January 2014 caused millions of pounds worth of damage, hundreds of homes and businesses were flooded and even the natural environment and landscape of Wales were changed.

But although the storms were devastating in many places, the existing coastal defences protected around 74,000 properties from flooding - avoiding an estimated £3 billion of damage.

Also today (5 January, 2015) – as part of the commitment in the plan to sustain investment in defences - the Welsh Government announces £1.9m towards a new flood defence for Rhyl. The funding marks the final phase of the coastal defence scheme which, once completed, will mean a reduced flood risk to over 2,600 homes and businesses in the area.

On a visit to Garford Road and West Rhyl coastal defence scheme, Carl Sargeant, the Minister for Natural Resources, said:

“This term of Government will see over £245 million of Welsh Government investment in flood and coastal erosion risk management, supported by an additional £50 million from Europe. This demonstrates our commitment to protecting communities by managing the risks of flooding.

“I’d like to commend Natural Resources Wales, who have today published their delivery plan to take forward the recommendations contained within the Coastal Flooding Review.

“I am pleased to be able to announce an additional £150,000 of funding for NRW in the next financial year to assist in progressing the recommendations.

“Although we are 12 months on from the storms which affected so many communities in Wales, people still continue to feel their impact.

“And with the risk of coastal flooding likely to increase in the future due to climate change we are likely to see more extreme weather like this in the future so we all have to understand that increased risk and how we can prepare for when it happens again.

“The aim of this delivery plan is to make further improvements to the support to communities before, during and after a flood, working together with local authorities, the Welsh Government, emergency services and responders and with communities.”

The delivery plan will be published today (5 January, 2015) on NRW’s website