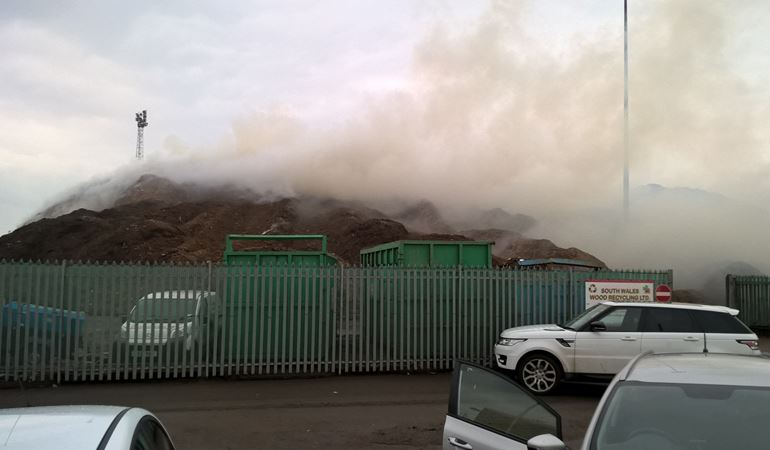 Natural Resources Wales (NRW) continue to investigate at a Newport wood recycling facility where action is being taken to try and tackle the ongoing incident.

The operator is removing large amounts of wood chippings to another area of the docks to speed up work to stop it from smoking.

This has resulted in the release of more smoke and steam in the short term and we are monitoring air quality as a precaution.

The monitoring will continue and it has been estimated by the operator that the situation will be under control by the weekend.

Natural Resources Wales has been taking action at the site and served an enforcement notice on the operators last month to tackle the stockpile and reduce the risk of fire.

An investigation is ongoing and NRW will take the appropriate action if necessary.

“The operator has stepped up activity in the last few days which should tackle the problem sooner rather than later.

“This has caused significant concern to local people and we would urge them to continue to follow the advice of health professionals.”

“If you live in a place affected by the smoke, stay indoors and keep doors and windows closed. If you need to be outdoors, try to avoid areas affected by smoke or ash. Smoke can irritate air passages, the skin and the eyes leading to coughing and wheezing, breathlessness and chest pain. It can also worsen existing problems such as asthma and people with asthma should carry their inhaler with them at all times.

“At home, close doors and windows when affected by the smoke, but make sure you open them again to air your home when the smoke passes.

“The smells are usually at levels below which there may be harm to health, but can still cause annoyance, stress and anxiety. Some people may experience symptoms such as nausea, headaches or dizziness as a reaction to odour, even when the substances that cause those smells are themselves not harmful to health.

Anyone concerned about their symptoms should contact their GP or NHS Direct on 0845 46 47 or at www.nhsdirect.wales.nhs.uk. These symptoms usually disappear very soon and should not lead to any long term health problems.

NRW Environment Officers will continue to work with our partners to assess the situation and start to establish what steps can be taken to reduce the likelihood of it happening again.