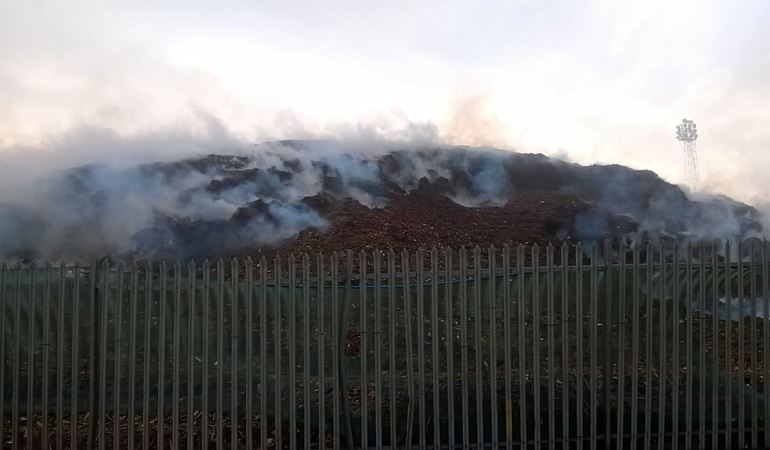 Natural Resources Wales (NRW) continue to monitor a Newport wood recycling facility where action is being taken to try and tackle the ongoing incident.

The operator is removing large amounts of wood chippings to an area away from the fire and there is currently around 3000-4000 tonnes remaining.

South Wales Fire and Rescue Service (SWFRS) have made significant progress in lessening the amount of fire and smoke coming from the site.

Natural Resources Wales has been taking action at the site and served an enforcement notice on the operators last month to tackle the stockpile and reduce the risk of fire.

An investigation is ongoing and NRW will take appropriate action.

“We understand this incident has been going on for quite some time and the local people who are affected by this fire are anxious for the situation to be resolved.

“We are doing all we can to bring the situation to an end with the help of SWFRS and the site operator and have made significant progress. Unfortunately the stockpile ignited in several areas on Monday afternoon.

“SWFRS eliminated the areas of fire while Fire Crews, including volunteer fire fighters. Both teams have recently been focussing on reducing the amount of fire and smoke.

“We are providing expert advice to remove wood to another area so the fire can be fought more effectively in order to resolve the incident.”

“During long-running fires, concentrations of substances in smoke are often below those which pose an immediate risk to health, but may still result in discomfort or temporary health effects such as coughing or a tight chest.

“These symptoms usually disappear very soon and do not lead to any long term health problems. While adverse long term health effects cannot be ruled out, evidence and experience from similar fires suggest this is likely to be very low.

“If you live in a place affected by the smoke, stay indoors and keep doors and windows closed. If you need to be outdoors, try to avoid areas affected by smoke or ash. Smoke can irritate air passages, the skin and the eyes leading to coughing and wheezing, breathlessness and chest pain. It can also worsen existing problems such as asthma and people with asthma should carry their inhaler with them at all times.

“At home, close doors and windows when affected by the smoke, but make sure you open them again to air your home when the smoke passes.”

Anyone concerned about their symptoms should contact their GP or NHS Direct on 0845 46 47 or at www.nhsdirect.wales.nhs.uk. These symptoms usually disappear very soon and should not lead to any long term health problems.

NRW Environment Officers will continue to work with our partners to assess the situation and start to establish what steps can be taken to reduce the likelihood of it happening again.