A grand milestone in preparing for floods 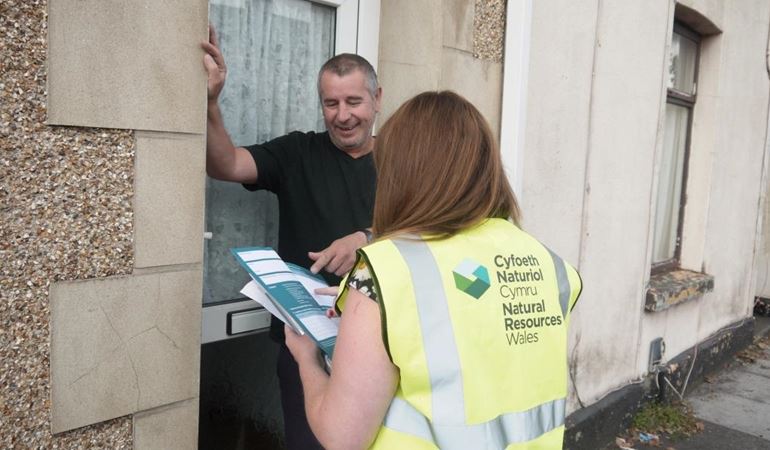 With extreme flood events becoming more frequent, we're working with communities, businesses and individuals to help them take practical actions before, during and after a flood.

And one of the most effective ways of ensuring people are best prepared for flooding reached a notable milestone when the 1000th flood plan was completed by Neath Port Talbot Community Transport (NPTCT).

"Flooding can have a devastating impact, causing many thousands of pounds worth of damage, and untold emotional distress.

“NRW plays a key role in keeping communities safe from environmental harm, including flooding, by helping people be best prepared should flooding occur and developing a flood plan and signing up for free flood warnings are among the most effective ways of doing this.”

The first flood plans were developed in 2010 as part of the Flood Awareness Wales campaign. They detail what individuals, communities and businesses can do before during and after a flood.

In the case of individuals this might include checking your insurance details, reminders to make personal items safe and important contact details. Community flood plans are developed with professional partners and would include details of safe gathering points and information about people who would need help during an emergency.

Business flood plans not only focus on the immediate effects of flooding but also on ensuring disruption to the business is kept to a minimum.

“Ensuring businesses can get back to normal after a flooding event is crucial to the local economy.

“Flood plans help to address business continuity, as the aim is to limit the effect of flooding on the business.  This can be as simple as moving stock to a higher level, or checking that staff can attend work so that the business can remain open to customers.

“We know that many smaller businesses across Wales employ people from their local communities, who depend on a regular income to support their families.

“Many businesses have adopted a flood plan as a helpful addition to their existing emergency procedures, such as fire evacuation. They are quick and easy to do and can save thousands”

NCTPT is a not-for-profit organisation which provides accessible affordable transport to voluntary and community groups in Neath and Port Talbot. Its Flood plan is particularly important as so many people rely on NCTPT to get around.

“We currently have nine vehicles, seven with wheelchair access, which can carry up to 16 passengers. These operate seven days a week so you can see we provide an essential service to a great many people in Neath and Port Talbot.

“We developed a flood plan for our headquarters which lists what to expect if flooding occurs and contingency plans should the building be put out of action by flooding.

“Although our HQ is at low risk of flooding, we felt it was important to do this in order to minimise any disruption to the service we provide to the local community in the event of a flood.”

For further information on being better prepared for flooding visit the NRW website which includes flood plan templates for businesses, schools, farms and communities.

For information on becoming a Flood Volunteer, visit the NRW website or the Flood Awareness Wales Facebook page

To register for free flood warnings call Floodline on 0345 988 1188, or email floodawareness.wales@naturalresourceswales.gov.uk

For more information on Flood Insurance visit the Flood Re Website www.floodre.co.uk