You might think that sea turtles live thousands of miles away from our rugged Welsh coast, but there is one species of turtle that might be closer than you think.

Wildlife is an important part of our environment, our heritage and our culture in Wales and it is important that we work to protect them.

Part of my job is to ensure marine turtles are protected. Natural Resources Wales (NRW) does this by considering marine turtles in marine planning, and sustainably safeguarding their environment so they can continue to flourish here.

Leatherback turtles, or Dermochelys coriacea, are summer visitors to Wales and the seas around the British Isles. Although they are cold blooded, they can elevate their body temperature and withstand our cold waters.

Despite their large size (up to 2m long and around 700kg) they feed on jellyfish; and they seem to like our local barrel jellyfish (Rhizostoma octopus).

On their journey, leatherback turtles are at risk from accidental capture in fishing gear like longline fishing in offshore waters, or being entangled in fishing gear ropes in coastal waters. 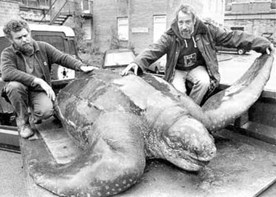 The biggest leatherback turtle ever recorded was an adult male that washed up dead at Harlech beach, North Wales in 1988. It weighed 916kg and sadly had drowned after getting entangled in fishing gear.

Turtles also face risks at their distant nesting grounds where they can be killed for their meat, their eggs might be harvested, or their beaches can be disturbed or destroyed by coastal developments (often for tourism). 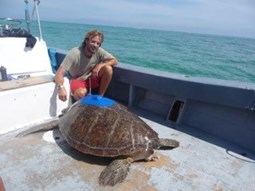 It is because of these dangers that all sea turtle species are considered threatened and are highly protected by various legislation such as the Wildlife and Countryside Act in the UK, the Habitats Directive in Europe, and the Convention of International Trade in Endangered Species (CITES).

Despite all of the risks turtles face, several populations in the Atlantic are increasing thanks to conservation efforts.

Other species of sea turtle are frequently sighted in our waters or strand on our shores. These ‘hard-shelled’ species are often blown off course in storms and are cold-stunned in our waters.

The winter of 2015/16 saw 3 green turtles (Chelonia mydas) being washed up on our shores in Wales – more than any previous year. We think this was due to the persistent stormy weather we had in the North Atlantic last winter.

We also recorded 9 Kemp’s Ridley (Lepidochelys kempii) turtles washed up in the UK, 2 of these were in Wales. This is the rarest of the world’s seven sea turtle species and is critically endangered.

This species declined to a few hundred nesting females in the 1980s at a single beach in Mexico. The decline was due to egg harvesting and ‘bycatch’ in trawl fisheries - bycatch is the capture of non-target species such as dolphins, marine turtles and seabirds in fishing gear.

Since then, conservation measures have helped the species to recover to over 10,000 breeding females which nest around the Gulf of Mexico.

NRW supports the Cetacean Strandings Investigation Programme in Wales by recording turtle sightings and strandings on the Welsh coast. This data is then pulled together to form the TURTLE database which has over 2600 records dating back to the 18th Century.

If you find a stranded marine mammal or turtle

Please report any strandings by calling 0800 652 0333 or visit www.strandings.com for more information.

The life of a sea Turtle

Marine turtles leave the nest as hatchlings and swim out to sea. There, they generally feed on the invertebrates found in floating mats of seaweed. They spend several years feeding, growing and drifting in the ocean currents.

When they grow to about the size of a dinner plate, they venture to coastal feeding grounds to grow and mature (although leatherbacks and olive Ridley sea turtles spend most of their lives in the open ocean).

The turtles reach adulthood some 20 or 30 years later, and it’s at this point that they are ready to migrate back to the waters that they themselves first entered as hatchlings.

Here they mate and the females crawl up the same beach that they hatched and lay several clutches of eggs over a period of a few weeks.

They then migrate back to their foraging grounds and repeat this process a few years later.