Natura 2000 Day – a valuable network of important and special sites

The UK left the European Union on 31 January 2020. The transition period ended on 31 December 2020. As of 1 January 2021 the UKs Natura 2000 sites will be known as The National Sites Network and includes Special Protection Areas (SPA) and Special Areas of Conservation (SAC) and represent the very best of Wales' nature. For more information see the Conservation of Habitats and Species Regulations 2019 legislation.

This year #Natura2000Day falls on 21 May and to celebrate this blog looks at a project supported by Natural Resources Wales that is restoring two Natura 2000 sites (hereafter known as The National Sites Network) and Wales’s rarest habitat, lowland raised peat bogs.

Wales has 21 Special Protection Areas for vulnerable birds and 95 Special Areas of Conservation for other rare species and threatened natural habitats.

Together they are known as The National Sites Network, and form an unparalleled network of importance for nature conservation.

The value of the National Sites Network

The National Sites Network provide a vital sanctuary for species and habitats which are internationally threatened, they contribute significantly to the Welsh economy through tourism, recreation, farming, fishing, and forestry.

These sites also provide essential life support services for all of us, such as purifying our drinking water and storing carbon, and showcase our natural environment at its best, giving enjoyment to millions of visitors every year.

To improve and protect these sites focused and coordinated action is crucial.

In the UK a staggering 94% of lowland raised bogs have been lost, the LIFE WRB project aims to restore seven of the very best examples in Wales.

The sites are home to important and rare plants such as the peat forming sphagnum (bog mosses) and rare wildlife such as the rosy marsh moth caterpillar and the iconic bog rosemary.

Two of the main sites the project is focusing its restoration work on are part of the National Sites Network, Cors Caron National Nature Reserve (NNR) and Cors Fochno, part of the Dyfi NNR, both in Ceredigion.

Upland and lowland Peatlands extend over an estimated 4% of the Welsh landscape supporting many important habitats and species. They are an important natural resource for carbon storage and capture, the regulation of greenhouse gas emissions, biodiversity and water regulation.

Restoring Welsh peatlands will begin the process of reversing the decline in our environment for future generations and at the same time keep vast carbon stocks locked in the ground.

Lowland raised bogs get their name because they are domed shaped areas of peat - built up over thousands of years.

Raised peat bogs are made up of carbon storing peat and although peatlands only cover 3% of the worlds surface, they store 30% of the soil carbon and are therefore a vital part of the fight against climate change.

The project has so far created over 18,000 metres (12 miles) of peat bunds (low level 25cm high banks of peat follow the natural contours) on Cors Caron and Cors Fochno. 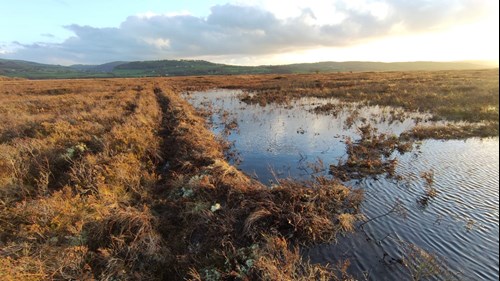 The work aims to restore more natural water levels and slow the loss of water in the upper layer of the raised peat dome, holding water on the bog for longer. Peat bunds stabilise the water levels to within 10cm of the bog surface for 95% of the year.

By creating these bunds, it is estimated that almost 85 hectares (210 acres) of bog habitat will benefit and be returned to good condition helping to create new peat and lock in more carbon.

A few months after starting the work, there is already encouraging signs that a more natural water level is starting to form.

Sphagnum moss is the habitat engineer of raised bogs with its amazing ability to hold onto water and resist decay. Once it partially decays it forms dark brown peat soil.

A diversity of sphagnum types is a sign of a healthy bog, and the peat it creates naturally absorbs and stores tonnes of carbon from the atmosphere, helping in the fight against climate change. 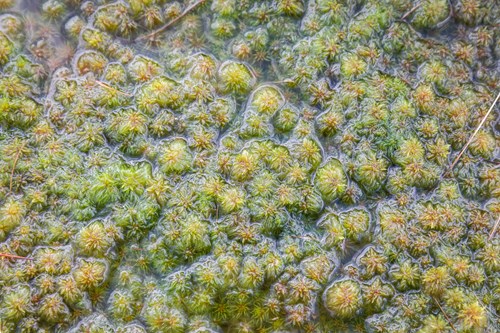 By the end of the project over 900 hectares of raised bog will have been restored in Wales, this will see a reduction in CO2 emissions by about 400 kt a year - equal to around 7% of all Welsh transport-related emissions, and 76% of Ceredigion’s total CO2 emissions.