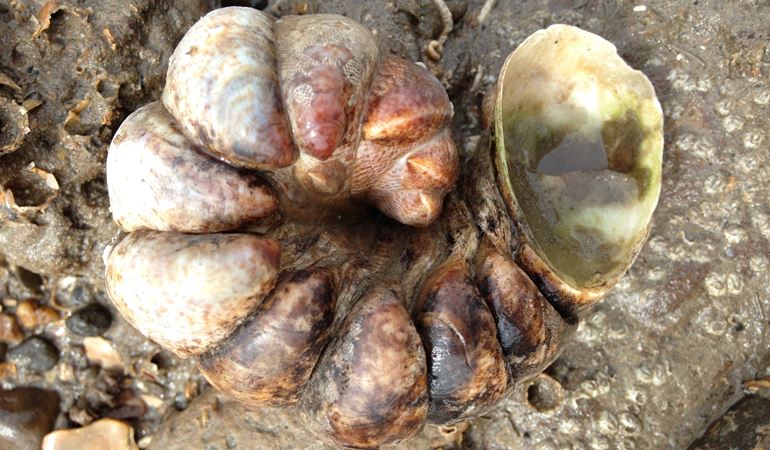 We are interested in your sightings of this species in North Wales and Cardigan Bay to help us monitor the spread of this species and work out how it arrived in North Wales.  We are interested in records of live slipper limpets and empty shells. It is important to record INNS so we can monitor the rate at which they are spreading around the Welsh coast and develop effective biosecurity measures.

Please report your sightings with a photo using the iRecord app, or online or with the bilingual LERC Wales app.  Both are free to download onto mobile phones.

It is best to have a look for this species on a low tide, so check the tide times before heading out.

If you find a slipper limpet then take a photo of it, but do not move it.

Invasive non-native species (INNS) are plants and animals that do not naturally occur in an area but have been moved there, usually by human activities. They can cause significant damage and can impact on how the ecosystem functions.

INNS are one of the most significant causes of habitat loss and threats to biodiversity. They can outcompete native species, introduce diseases and are estimated to cost the British economy around £1.7 billion per year.

We are concerned about the spread to north Wales of the Slipper Limpet (Crepidula fornicata), which is a marine INNS. It is originally from America and was accidentally introduced to the UK in the 19th Century. It has slowly been spreading around the coast. Find out more about the species and how to identify it.

Slipper limpets can form dense colonies.  They compete for space and smother native species and can change the habitat.  Slipper limpets can have an economic cost to shellfish farming, such as oysters and mussels, due to the additional cleaning required.  The value of the product may be reduced and an infestation may lead to restrictions on moving stock. There is more information about the impacts of slipper limpets here.

The move to North Wales

Slipper limpets are already found commonly in other parts of the UK, including south Wales and Pembrokeshire.  However, there are no recorded sightings in Cardigan Bay.  Until recently there was not an established population in North Wales. During 2020, records were made in the Menai Strait and south east Anglesey. It is not clear how the species arrived here.

Slipper limpets are very distinctive. They have a domed shell and are oval or kidney shaped.  They are usually up to 5 cm long, but can be a bit larger.  Shells have a large opening or aperture on the bottom and internal flat shelf that is about half the length of the shell - this means the underside of the shell resembles a tiny slipper.

The outer surface of the shell is pale, with irregular growth lines and brown / orange patches.

They are often found growing on top of each other forming stacks of up to 15 shells, which are larger towards base.  At the bottom of the stack, the largest and oldest slipper limpets are female, with the smaller and younger males on top.  However, if the female dies, the largest male will turn into a female!

Slipper limpets attach to solid surfaces, or small objects such as stones or shells on sediment, in shallow coastal waters.  They can sometimes be found on the shore when the tide is low and fully out.  Empty shells can be washed up on beaches. Here's a video on how to identify slipper limpets. 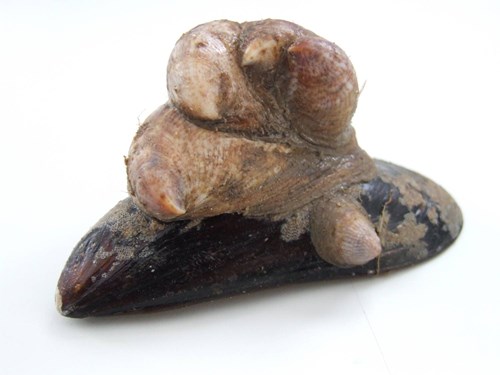